America’s wealth is eroding.  Its economic pie is shrinking …, and slices soon will be getting smaller.

The focus of Coronanomics 201 is on the size of America’s metaphorical wealth/wealth-creating pie …, and on how its size has been affected by the novel Coronavirus.  America’s pie has to be big enough to “feed” all of its citizens …, and fend off its increasingly hungry and hostile competitors.  That pie ceased growing years ago.

America’s economy for the past 240 years has blended a potent combination of economic ingredients and heated them at an optimal Capitalist temperature to create a world-beating American pie world-beating wealth.  The success of that process resulted in a highly-educated workforce working at high-paying jobs producing high-quality goods and (at least until the early 21st Century) utilizing the world’s most advanced infrastructure …, all of which allowed Americans to live life at the very highest levels of global prosperity.  America’s pie attracted capital from all over the world (America being a capital magnet precisely because of those ingredients and its Capitalist recipe) that America wisely invested in resources and buildings and manufacturing and businesses and education and technology and infrastructure … and in the American people who, to their credit, largely took advantage of the education that America made available to them … and who worked the land and built the buildings and operated the machinery and developed the technology and made effective use of the infrastructure.  The bigger and better the pie’s ingredients and the more successful America’s recipe, the happier and more prosperous America – and Americans – became.

In Coronanomics 101, TLR described the new Covid-19 normal … where the Federal government and the Federal Reserve have been continually printing a virtually unlimited quantity of Dollars in an effort to ensure temporarily sustain the economic well-being of Americans.  The government is printing those Dollars during a period when both supply and demand are shrinking – that is, when America is not producing the pie’s necessary ingredients …, is not mixing them together in the same ways …, and is not cooking them pursuant to the historically-successful American recipe.  The hope is that those newly-printed Dollars at some point will be invested in new resources, buildings, manufacturing, education, technology and infrastructure that will naturally create renewed demand and an expanding workforce, growing the pie for the benefit of all Americans.

That is not what those Dollars currently are being used for and, unfortunately, that’s not how Coronanomics works.  The printing of Dollars in itself creates only … more Dollars, Dollars that Americans can’t “eat” … although those Dollars create the appearance that they’re enlarging the economic pie.  Newly-printed Dollars therefore are like yeast.  They raise the height of the pie crust and make the pie appear larger …, although the perimeter of the pie, its size and contents, actually are shrinking.  As Clara Peller might ask of America’s government, “Where’s the beef?”  Although America’s pie now holds over $25 trillion crisp government-printed Dollars – the amount America so far has borrowed to fill its pie, the size of the pie itself, America’s output of goods and services, continues to shrink.  Dollars cannot create American wealth unless they’re invested in wealth-creating assets.  Covid Dollars are being used instead to bail out failing businesses – not fund new, successful ones – and feed unemployed workers – rather than create long-term jobs for America’s workers.  Since those Dollars nevertheless need to go somewhere, they’ve been invested in stocks, bonds and real estate the prices of which continue to rise.  Those Dollars are not developing resources or being invested in new construction or in factories or education or infrastructure, all of which are the prerequisites for wealth-creation.  Dollars alone cannot themselves produce – they cannot produce food, clothing, shelter, goods or services.  They have to be fruitfully deployed to do so.  When that doesn’t happen, the only effect of flooding the world with Dollars is to inflate the pie’s appearance by and, at the present time, increasing asset prices.

Coronanomics did not begin in 2020.  It had its origins in the Great Recession of 2008-09.  Economic growth thereafter was meager disappointing moribund and was accompanied by a combination of the largest stock market, corporate credit, student loan, and auto loan expansions of all time …, which was promptly followed by Covid-19 … and the largest supply-and-demand shock in human history.  That’s an historically-unique combination of cataclysms.  America’s debt and deficits today stand at record levels.  Add-in the fact that America is on the cusp of massive Baby Boomer retirements that will create unprecedented stock and bond market liquidations, the globally-reverberating impact of emerging market defaults on Dollar-denominated debt, the EU banking crisis, the crippled economies of Italy, Greece, Spain, Russia, Brazil and others, Middle East tensions, China, Brexit, the energy glut and badly broken international supply chains … and no one can question that the world is sitting on an economic powder keg that may ignite at any time …, with no clear apparent plan to avoid a possible calamity.  The enormous quantity of money that the U.S. government continues to inject into the world’s America’s economy with the goal of increasing productive capacity and rebuilding that which economic closure has destroyed is instead flowing into unproductive assets.  Central Banks the world over have been employing the very same unsuccessful money-printing techniques during the past 11 years.  The result has been bull markets in stocks, bonds and real estate that inflated their values to exalted heights … while creating an ever-widening wealth gap … but not a larger productivity pie.  Increased investment in resources, buildings, machinery, successful businesses, education, technology and infrastructure was not one of money-printing’s achievements.

The question for America’s government today is how to resuscitate its broken economy, fix its dysfunctional political system and address its socially-divided culture while, at the same, providing for those whose health has been devastated by Covid-19, who have been handicapped by America’s suddenly shifting job market or disadvantaged by America’s apparently inadequate education system, its excessive debt or its drug epidemic.  Despite the robust efforts of the Federal government and the Federal Reserve, America’s pie is contracting.  The harsh economic reality is that America has a finite-sized pie …, one that is continuing to shrink and is likely to continue shrinking for as long as Covid-19 remains untamed.  There is only so much American wealth that can be divvied up among all of America’s deserving constituencies.  America’s pie is only as large as … it actually is.  America no longer lives in the 1960s with a seemingly ever-expanding economy and annual growth in excess of 5%/year.  GDP growth from 2010-2019 was barely 2%/year …, and that was before Covid-19.  It was –5%/year in Q1 of 2020 and -32.9%/year in Q2!  Debts and deficits permeate America’s Federal and State treasuries.  There accordingly is only so much pie.  It is up to America’s elected officials to increase the size of that pie …, to grow it …, to work together to slice it in appropriate-sized portions for all its citizens … as well as for America’s future generations.

They haven’t seen that as their priority for a very long time.

Republicans favor an extension and enhancement of the tax cuts they enacted in 2017, believing that lower taxes release the animal spirits of Capitalism and therefore will result in the development of new resources, new factories, new businesses, better educational facilities, new technologies and rebuilt infrastructure and, in doing so, enlarge the American pie and generate increased Federal revenues that will more than offset massive tax cuts.  Democrats want to directly address the devastation wrought by Covid-19 through a multifaceted enlargement of America’s safety net, an enhanced Medicare system, a guaranteed national minimum wage and an increased allocation of Federal resources to comprehensive 21st Century-centered infrastructure spending, paying for the increased expenditures through increased taxes on corporations and wealthy Americans.  Neither party has a plan to repay America’s debt or make America the world’s premier competitor.  Both political parties assume that America has a virtually unlimited pie and that its printing press can be used to pay for anything and everything (both explicitly or tacitly in their adoption of the tools of Keynesianism and Modern Monetary Theory).  That ceased to be true years ago.  Both political parties ignore the economic realities of an unrepayable, rapidly expanding Federal debt, as well as the fact that America’s economic pie is finite and in a massive Covid-19 contraction.  Republicans cannot continue to under-tax and Democrats cannot continue to over-tax.  Both cannot continue to overspend on programs that don’t increase the pie’s productive ingredients or the economy’s output.  MMT is not a cure-all; rather, it’s a rabbit hole (a subject for a future Coronanomics TLR).

There are any number of economic consequences that inexorably flow from ignoring these realities.  With money supply growth surging at the same time as output is declining, the value of the Dollar is falling … and may fall through the proverbial floor.  It is now more than 9% lower than it was as recently as mid-March.  Goldman Sachs, among others, has warned about the potential loss of the Dollar’s status as the world’s reserve currency in light of America’s soaring debt and rising political and social conflicts.  TLR most recently addressed this American-way-of-life-threat on February 5th in “The Weakening Dollar.”  The weakening Dollar, MMT, Central Bank money-printing, and Covid-19 frame multiple inflation-deflation concerns.  These, too, are ripe subjects for future Coronanomics TLRs.

America needs to quickly start baking a bigger pie … or Americans will need to reduce their expectations … or perhaps there will be worse unpleasantness and those are the more optimistic possibilities. 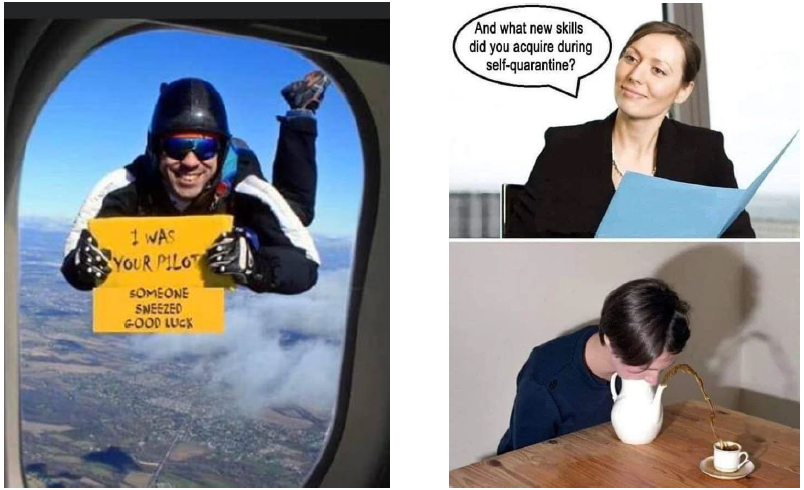