“It’s your kids, Marty.  Something’s gotta be done about your kids!” – Doc Brown, Back to the Future, Part II.

America has been the most successful, most powerful and most creative nation in history.  Some ascribe America’s greatness to American Exceptionalism.  Others point to America’s unique form of Constitutional Democracy.  And yet others argue that American Capitalism is the reason why America outshines all other countries.  While each has been a significant contributor to America’s enormous success, what has set America apart ahead of its global rivals for more than a century has been its outstanding education system.  It provides every American with 13 years of publicly-funded schooling – with the freedom to discretionarily pursue private/home-schooling – and the option of additional degree programs through a broad selection of exceptional public and private institutions of higher learning.  Fashioning a nation-wide education system that provided Americans with the opportunity to maximize their knowledge and abilities, America’s economic engine was stoked with an essential raw material necessary to create the best businesses and the highest-paying jobs.  Americans were incentivized to engage in the most sophisticated research.  And the U.S. became the beneficiary of an economic, social and geographical miracle that endowed each American with unparalleled liberty, opportunity and mobility.

As TLR discussed almost a year ago (here), America rose to become the greatest nation on Earth in significant part because of America’s superior educational system that provided Americans with the highest level of knowledge and training best educational opportunities on Earth.  It was a demonstrably superior multi-track, multi-level structure dwarfing in size, ambition and cost the educational opportunities offered by any other country.  Excellence in teaching and in the opportunity to learn was the American Way, a linchpin of the American Dream.  With the world’s best education system, America became the wealthiest nation on Earth.  Superbly-educated Americans excelled.  They built, they invented and they invested.  They created seemingly endless opportunities for themselves, their neighbors and their children.

The past few decades have seen a precipitous decline in America’s global educational competitiveness.  Even more frightening is the fact that this past year has seen an almost cataclysmic deterioration at all levels of American education.  America is behind, and is now falling further behind, its competitors.

To paraphrase Doc Brown, “It’s your kids, America!  Something’s gotta be done about their education!”

In its most recent 2018 rankings of national education systems in math, reading and science, the Programme for International Student Assessment (PISA) reported that the U.S. had a dismal ranking among the world’s industrialized countries – 37th out of 79 countries in math, 13th in reading and 18th in science –, and there is little doubt that the U.S. has slid further in the educational rankings over the past two years with Covid-19 having hit America’s education system particularly hard.  Declines in public school attendance throughout the country during 2020 are well-documented (see “School Enrollment Vanishing Act” in the February 6th The Economist).  A recent McKinsey study, for example, concluded that American students from kindergarten through fifth grade have seen comparative annual declines of 20% in reading and 33% in math.  China, on the other hand, ranked #1 in all three categories in 2018 and has experienced virtually no adverse educational impact from Covid-19.

By every measure and employing any number of different educational standards, America’s education system no longer is competitive with its international rivals.  Without a better, more successful focus on educational excellence, on recreating reorganizing reprioritizing revitalizing its once-outstanding education system, America will fall further behind …, in a world that is increasingly educationally competitive … and at all levels.  America achieved the pinnacle of global economic success by producing generations of well-prepared, well-trained, and highly-educated citizens, by having the world’s premier publicly-funded education system that provided a range of opportunities for its children, rich and poor, and by establishing a world-beating selection of colleges, universities and related research institutions.  The quality of the educated graduates a country produces determines its long-term economic, social and political success.  Today, the future of America is being undermined by its failing inferior outdated exceedingly flawed education system and inadequately-educated graduates.  Should it fail to adjust to the 21st Century’s educational realities – and find ways to compensate for the adverse educational impact of Covid-19 –, it should expect that its economy, its social structure, and its democratic institutions ultimately will flounder.  America’s most recent international education rankings of 36th, 13th and 18th are a potent indicator of America’s future.  They sound a clarion call for change, change in the approach of America’s Federal, State and local governments to the funding of education, of what is taught and of how students are educated.  America cannot countenance, and American prosperity and global hegemony cannot survive, continued educational mediocrity.

The U.S. Bureau of Labor Statistics (BLS) in its February 2021 Monthly Labor Review predicted a dismally-declining American job market for high school drop-outs and those with only a high school education.  An Inconvenient Truth of Covid-19 is that it has exacerbated problems for the less-skilled and less-educated, reducing their employment prospects while increasing their numbers.  At the same time, the BLS predicted that Covid-19 will increase job opportunities for those with college and post-graduate degrees – for example, in medicine, medical services, medical sciences, computing, technology, biology, biotechnology, data administration, etc.  If those predictions are correct, income inequality will increase …, and with it class, racial and regional divisions.  The BLS report highlights the importance of education to America’s future, and focuses on the educationally-driven economic impact of Covid-19 on 21st Century businesses – they will find it challenging to fill highly-skilled hiring needs, to America’s economic disadvantage.  The lower test scores that America’s 20th Century educational curricula and teaching methods produced prior to 2020 have been exacerbated by Covid-19.  The resulting reduced knowledge and skills of America’s labor force, in turn, will reduce business productivity, negatively impact earning potential, and reduce American economic growth.  Economists have estimated that that the long-term cost to the U.S. economy from America’s 2020-21 education depression – aside from other significant Covid-19 economic consequences – will be between $14 and $18 TRILLION.

As a nation, the U.S. chose a haphazard, uncoordinated and inconsistent route to deal with the educational impact of Covid-19.  American school districts all-too-often defaulted to remote learning – which experts overwhelmingly agree is inferior to in-person schooling – while failing to provide students – primarily minority, rural and low-income students – with the technological and support tools necessary to make remote learning a success.  The consequences are stark.  According to a January report from Common Sense Media and the Boston Consulting Group, an estimated 12 million American children haven’t had the internet tools and connections needed for remote learning and, according to Bellwether Education Partners, approximately 3 million children missed out entirely on a full year of education.  Those children have been left behind.  Because black and Latino Americans are more likely to have contracted Covid-19, more likely to have been hospitalized for it, and more likely to know someone who has died from it, parents of black and Latino children have preferred remote education over in-person schooling, to their children’s distinct disadvantage:  55% of black parents and 40% of Latino parents in a recent Axios/Ipsos poll were either extremely concerned or very concerned about schools in their communities reopening too quickly during Covid-19 … compared with 25% of white parents.  As a consequence, the school-attendance racial gap now is wider than ever, exacerbating educational inequality and class, labor union, and racial divides.

There continues to be significant tension between teachers’ unions, on the one hand, and urban school districts and parents’ groups, on the other.  According to a report from the Center on Reinventing Education at the University of Washington, almost 75% of urban school districts currently offer only remote instruction.  They have been pressured by teachers’ unions and parents (Chicago being a highlighted example), often by minority parents who question the adequacy of Covid-19 safety measures … with the result that fewer than 50% of students physically attend in-person classes even when they are made available.  Although President Biden has made school re-openings a national priority, the Federal government is powerless to compel them, a further Inconvenient Truth in America.  Little therefore has been attempted at the Federal level.  Simply put, educating America’s children hasn’t been a high enough priority for America’s voting public.  It needs to be.  It is hoped that the deleterious educational effects of Covid-19 will change the non-benign negligence of America’s elected officials.  After all, American voters no longer can question the long-term adverse effect that educational deficits have on America and its children, on future generations and their economic, social, psychological and physical well-being.  The Inconvenient Truth is that America is orchestrating its own long-term decline by disregarding the importance of revising its educational institutions, by not adopting a national policy, and by not redirecting tax dollars to the places where they will do the most good.  Students who have been on the wrong side of the cultural, economic or digital divide will face virtually insurmountable hurdles in trying to catch up.  That’s a reality that America’s governments must face and aggressively address …, or come to terms with the Inconvenient Truth of America’s inevitable decline. 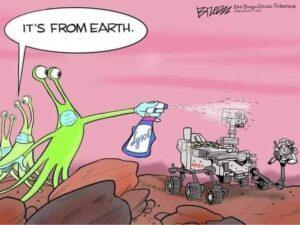