Posted at 18:44h in Politics by William Natbony 0 Comments

Did you ever wonder where the term “gerrymander” comes from? (It means the redrawing of electoral maps in order to obtain a partisan advantage.) Its derivation is a combination of Elbridge Gerry’s last name (he was the governor of Massachusetts in 1812) and salamander, which is what the newly-drawn district resembled. Ironically for today’s partisan political world, Governor Gerry was a member of the Democratic-Republican Party (the opposing party at the time was the Federalists). Governor Gerry, together with a Democratic-Republican legislative majority, redrew the map of a state senatorial district. The resulting cartographical contortions assured a Democratic-Republican majority and led a Boston newspaper to publish a satirical cartoon that showed the district in the shape of a dragon-like salamander: 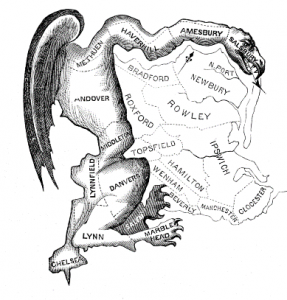 Hence, Gerrymander! The Federalists distributed the caricature throughout the nation … and the rest is history. The term “Gerrymander,” together with partisan political redistricting, entered the American lexicon and American politics.

How does gerrymandering affect politics in the 21st Century?

Both the Democratic Party-controlled government in Maryland in 2011 and the Republican Party-controlled government in North Carolina in 2016 gerrymandered with abandon. They did their very best to channel their substantial computer power and Governor Gerry’s skills in state-wide congressional redistricting. In doing so, despite an almost even state-wide split of voters in North Carolina, 10 of 13 Congressional seats went to the Republicans (the sponsor of the redistricting plan lamenting that he had been unable “to draw a map with 12 Republicans and two Democrats”) and, although Maryland is a heavily Democratic state, it elected almost all of the State’s Congressmen – 7 of 8 –, more than proportional redistricting would have created.

But this is America … and that’s unfair that’s undemocratic Congress wouldn’t allow this to continue so lawsuits were brought.

Both cases currently are before the U.S. Supreme Court and it’s anyone’s guess what the nine Justices will decide. Oral arguments did not reveal a significant leaning either way. My legal background makes me sympathetic to a strict constructionist conclusion: The framers of the Constitution did not explicitly leave final redistricting determinations to the judiciary. On the contrary, district-drawing decisions were placed in the hands of state legislatures (with Congress having final oversight). Throughout American history, the party in power has abused exercised its Constitutionally-granted power by appointing partisan civil servants, partisan advisers, partisan judges, and partisan election officials. Why shouldn’t the party in power additionally be able to perpetuate itself through gerrymandering? After all, how long will that be tolerated by the voting public? Eventually, voters will become disgusted and vote out governors and legislators who approve excessive gerrymanders and deprive them of their representative voting rights, wouldn’t they?.

The fact is that eventually can be a long time … sometimes too long a time … and a lot of horrible things can happen in that time. As history has shown, a one-sided government (whether in Venezuela or Turkey or Russia … or in local and state-wide government) is a poster-child for the abuse of power.

When one party has elected both a governor and a legislative majority, their primary goal has been to retain power by ensuring their re-election. The spoils system – cronyism – has enhanced their ability to do so and has been one of several tools used by those in power to control optimize their re-election. The appointment of cronies to government patronage positions also has the unfortunate consequence of creating bureaucrats who often sometimes are neither competent nor committed public servants. The concept of “the best and brightest” takes a backseat to the perpetuation of power and every so often to the proliferation of no-show and nominal-show positions. The awarding of government contracts becomes a contest to maintain connections with the governor, legislators, and judges who attained and maintain their positions by appointment or through one-party-controlled elections. Local businessmen competing for government contracts are counted on to maintain a significant flow of election funding. Corruption, whether unethical or felonious, thereby often becomes the norm. That’s how the local and state-wide American democratic system frequently has functioned and all-too-often malfunctioned. It has done so off-and-on for more than two centuries. The question for the Supreme Court is whether now is the time to find a Constitutional basis, and an enforceable mechanism, to change that pattern in Congressional elections.

Legal precedent suggests it shouldn’t. And, yet, having a responsibility to ensure the continuity of an efficient constitutional democracy suggests that it should.

Whichever direction the Supreme Court selects, technology is changing the world … and the times are dictating a changing polity (see, for example, The Lonely Realist of March 6, 2019). Politics in 2019 doesn’t work in the same ways as in 1812 … or even 2012. The party in power now has access to Big Data (perhaps the most powerful commodity in today’s world) as well as computerization that together enable politicians to redraw electoral districts to a fine point. That makes it easier to maintain power and perpetuate control. It makes it all too easy.

Perhaps the question isn’t one for the Supreme Court but instead for Congress. Congressional Democrats attempted a national legislative fix in 2017 by proposing an end to gerrymandering and a requirement for independent commissions to draw districts in each State. How a determination of independence can be assured is a separate, and currently premature, question. Instead of asking whether the Democrats would be as proactive if they controlled the substantial majority of state governments or whether the Republicans have opposed the proposed legislation because they actually do control the substantial majority of state governments, the question should be “What sort of democracy does America want going forward?” Should it be one that inherently favors the party in power or one that attempts, as best it can, to be neutral in electoral contests? The Lonely Realist, for one, is a fan of split-party governments where compromise becomes necessary and partisan appointments receive a proper legislative vetting. The Lonely Realist also is wary of the perpetuation of any single party in power, whether Democrat or Republican. For those reasons, it would be best for either the Supreme Court or Congress to find a way to at least curtail, and optimally to eliminate, gerrymandering.

According to Kremlin spokesman Dmitry Peskov, the Mueller Report contains “[no] evidence at all that Russia allegedly interfered in the U.S. election.” Talk about “fake news”!

The reality is that The Mueller Report reaches the unambiguous conclusion that “[t]he Russian government interfered in the 2016 election in sweeping and systematic fashion.” (See also The Lonely Realist of March 29, 2019.) For those who may doubt the evidence, reading The Mueller Report will change your mind.

What steps should the U.S. take as a result? In light of The Mueller Report, what role should the President play in determining those steps? Who should follow-up thereafter and to what extent? 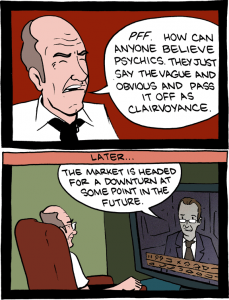