26 Jul Freedom of Speech and the Correctness Culture

Americans have a virtually unfettered right to say whatever they please.  Although governments in other countries habitually limit free speech in order to filter their citizens’ thinking and actions, that’s not the American Way.  Freedom of speech is incorporated by the Founders in the First Amendment to the U.S. Constitution to prevent Congress and the States from passing any law that might abridge Americans’ right to speak freely.  Americans accordingly treat it as fundamental … and the Supreme Court has wholeheartedly agreed, guaranteeing a unique and thoroughly American freedom from government interference in broadly-defined “speech.”  With few exceptions, Americans can articulate any opinion or idea – no matter how outrageous or ungrounded in reality it may be – without fear of government retaliation, censorship, or legal sanction.  The First Amendment does not, however, prevent individuals from trying to restricting other individuals’ free speech.

In interpreting the Constitution, the Supreme Court has delineated three categories of speech:  The first is criminal – speech that targets imminent physical harm.  That kind of speech is not protected.  The second creates civil liability for speech that can cause economic or emotional damage – this permits such speech, but allows those who are malevolently targeted to be compensated.  And the third category is any other form of speech …, all of which is protected.  Criminal speech includes “advocacy of the use of force … directed to inciting or producing imminent lawless action [and] likely to incite or produce such action.”  What that means turns on whether such speech creates a “clear and present danger” … and the courts have set a high bar on such imminent life-threatening behavior.  The classic example is falsely shouting “fire” in a crowded theater.  Doing so is not grounded in fact, is intended to cause physical injury, and is likely to quickly do so – precisely the kind of speech that is not protected by the First Amendment.  Utterances that don’t rise to that level do not require government involvement … and in America, the Constitution prevents it from doing so.  The First Amendment safeguards the freedom to make campaign contributions – neither Congress nor the States can limit the amount any person can donate to a political campaign or political party –, the use of expletives to make a point – an individual can say “F__k the draft” or “F__k” America without creating “imminent lawless action” –, and a person can publicly burn the flag of the United States to express his opinion because “government may not prohibit the expression of an idea simply because society finds the idea offensive or disagreeable.”  Try doing that in Russia or China or India or Poland or Turkey … or almost anywhere else in the world.  In its ground-breaking decision in Village of Skokie, which involved provocative actions by the American Nazi Party, the Supreme Court held that the First Amendment protects individuals’ rights to express their views no matter how extreme or repugnant those views are.  In that case, marchers through a Jewish neighborhood prominently displayed swastikas and shouted anti-Semitic expletives.

With the Courts protecting free speech that does not threaten imminent physical harm, “correct-thinkers” of all political and social stripes have been employing media (as well as civil legal tactics) to publicly suppress the speech of those they perceive to be “wrong-thinkers.”  The result has been to create a form of mob-censorship, a new correctness culture that publicly attacks free speech with which its adherents disagree.  At its extreme, it targets public figures with a goal of career-cancellation, creating a cancel culture that has become an important tool of social justice and a new form of mob intimidation.  The correctness culture seeks to establish new political, ethical and social norms.  Its mob action begins by calling-out and denigrating certain conduct, words and actions.  A natural escalation results in a call for the cancellation of any person who engaged in the now-discredited conduct, wrongful use of words or distasteful action.  In too many instances, an over-emphasis on correctness creates a naturally-formed censorship, one with increasing, and broadening, application.

The result is that purity of thought and action often are being valued more highly than inherently American freedoms.  In this new culture of conformity, comedians whose historical repertoire included homophobic, racist, sexist, or politically incorrect jokes have had their careers threatened and, at times, canceled.  Words and actions that in prior periods were viewed as off-color, in bad taste, or foot-in-mouth moments today are the subject of sharply-worded and philosophically-motivated targeted exposés.  Allegations of sexual misconduct almost ended the career of Lewis CK, while Roseanne Barr’s terribly inappropriate racial comments ended hers.  Their words were viewed by a mob-like mentality as “incorrect” and therefore a justification for censoring further speech by those malfeasors.

Free speech is a cornerstone of American culture and (along with the Rule of Law and American Exceptionalism) a key to America’s greatness – no other society in history has adopted such a radical, and radically successful, freedom.  “Correctness,” whether political, ethical or social, fits the profile of a static society …, which America is not.  Correctness thrives on collectivism with peer pressure requiring social cohesion, a concept antithetical to America’s frontier individualism and culture of self-determination.  Collectivism thrives on orthodoxy where tribalism and conformity are The Rule, whether racially (Aryanism; Japanese-ism; Hutu purity) or culturally (by divine right) or because of religious purity (whatever the religion) or based on adherence to a political philosophy (such as Communism).  Each is at odds with the foundational principles of Americanism.  The free exchange of ideas is an essential element of a pluralistic, Constitutionally-based democratic society.  Freedom of speech is integral in encouraging new ways of thinking, incubating ideas, promoting differences of opinion, and supporting compromise …, leading to wave-after-wave of American invention and innovation.  For over two centuries, America has been the world’s melting pot of peoples, ideas, practices and philosophies.

But that has changed.  Correct-thinking and censorship have gained a hardcore of diverse followers.

Although media naturally focus primarily on potentially career-ending “incorrect” speech of the rich and famous, a more insidious assault on free speech is the one being waged on a day-to-day basis by those who believe in a form of correct-thinking that requires censorship of others’ wrongly-held opinions …, who fervently believe in the rightness of their own thinking.  They demand uniformity and conformity.  A recent example – or perhaps an appropriate counter-example –, involves the online posting by Bari Weiss of her open resignation letter to The New York Times in which she rebukes The Times for permitting its staff to engage in an unacceptable level of vituperation liberal peer pressure criticism of her and her conservative views.  The resignation letter provides useful insights into the current culture of conformity, a culture also of easily wounded feelings, and a culture that consequently encourages the use of legal action, or the threat of legal action, to squelch different thinking.

Ms. Weiss’s letter castigates The Times for encouraging what she terms “[a liberal] orthodoxy known to an enlightened few [The Times editorial staff] whose job is to inform everyone else.”  She is dismayed by the attacks on her “Wrongthink” that made her “the subject of constant bullying by colleagues who disagree with my views.”  “[Fellow Times’ staffers] have called me a Nazi and a racist,” she says in the letter, adding that those staffers badgered friendly coworkers, and “openly demeaned” her work and her character “on company-wide Slack channels.”  The Times, she asserts, permitted “New York Times employees to publicly smear me as a liar and a bigot on Twitter…” and concludes that “there are terms for all of this:  unlawful discrimination, hostile work environment, and constructive discharge.”

A thoughtful critique of Ms. Weiss’s resignation letter appears in a July 19th Forbes editorial written by John Tamny, a conservative commentator.  He begins by stating that there is nothing noteworthy in Ms. Weiss’s observation that “the Times is full of hard lefties who are hostile to the classical liberal or conservative view.”  He points out that this is a fact that Ms. Weiss knew when she joined The Times 3 years ago.  He argues that “having one’s character ‘openly demeaned on company-wide Slack channels’ inside the New York Times sounds like heaven on earth,” since name-calling should have been a clarion call for a dedicated editorialist like Ms. Weiss because “most get into opinion writing in pursuit of debate….”  The importance of media free speech in Mr. Tamney’s view necessarily includes expressing contrary views, in Ms. Weiss’s case, conservative views to the archly-liberal staff at The Times:  “[W]hat writer on the right wouldn’t give anything to be inside [Ms. Weiss’s} ‘hostile work environment’ in order to spar with the other side up close, and yes, win?”  Ms. Weiss, he speculates, now likely will find an editorial position “at a right of center publication aggressively satisfying its own narrow audience.”  Mr. Tamney repeats the truism that the media, including The Times and Ms. Weiss’s future employer, have narrow constituencies which capitalism requires them to play to …, and which Ms. Weiss indeed decided to play to in her resignation letter.

From a legal perspective, there’s a bright line between the “unlawful discrimination, hostile work environment, and constructive discharge” Ms. Weiss complains of, and the unpleasant but perfectly legal and legitimate reality of peer pressure.  A “hostile work environment” created by the dislike of peers is a fact of life.  It crosses the legal line only if and when peer hostility results in inappropriate actions by management.  While it is apparent that Ms. Weiss was working at a media company with a liberal prejudice that was reflected in employees’ words and actions, Ms. Weiss’s resignation letter goes into no specifics that would justify, and no examples that would support, “unlawful discrimination, hostile work environment, or constructive discharge.”  Her invocation of those legal slogans legalisms suggest a different purpose.  The letter is not simply an attack on liberal prejudice.  It also paints her as an abused champion of ethics and conservative values who, like others who have been abused, properly should find redress in justifiable litigation.  That’s a poor argument, and a poor path forward, especially without evidence and examples.  Ms. Weiss should meet the correctness culture she complains of by the interpersonal sparring that Mr. Tamney advocates.  America already overly relies on vituperation and litigation to address societal disagreements.  Ms. Weiss’s resignation letter properly should stir editorial debate and lively media storms about the trade-off between audience entertainment and the weight to be given to correctness.  The courts have more important tasks at hand than to referee battles between disagreeing minorities.  Doing so is itself an abuse of Americanism.

Finally (from a good friend …, although a bit dated) 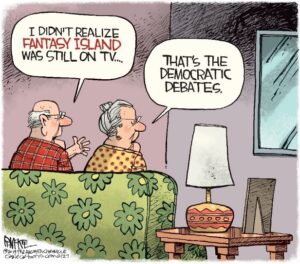