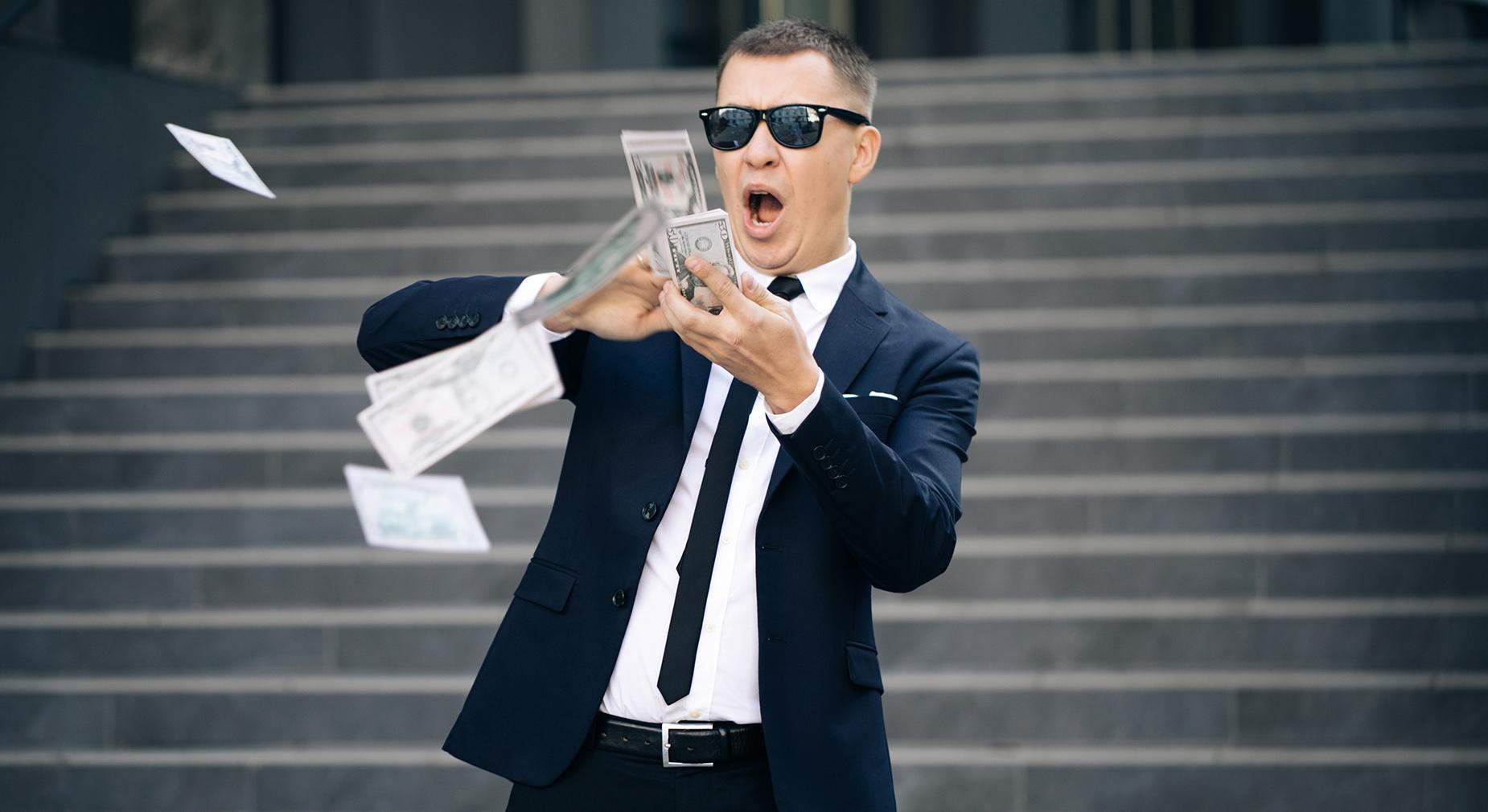 “Reddit users have organized themselves into ‘wolf pack’ communities where individual investors act together to hunt hedge funds, activist investors, and short sellers.” – The Lonely Realist

Social media are fond of describing the Wolves of Wall Street as hedge fund predators who feast on the weak. Wall Street, they say, is populated by a wealthy few who take advantage of the punier many, leveraging loopholes to create unfair profit that benefits them and harms society. That is hype, not truth. The battle they purport to describe is one between evil professional Wall Street investors and ordinary Americans. There is no such battle. Their interests are tied together. The Wall Street they portray includes money-grubbing activist investors and despicable short sellers whose activities cause permanent damage to American businesses. Their actions have the opposite effect. They are ruthless and destructive, increasing their already immense wealth at the expense of retail investors and retirees. Not so. They are described as manipulators of share prices who engage in devious tactics – not accurate – that harass or replace long-term management and force some of America’s most beloved companies to change their business operations and fire workers, going so far at times as to question the validity of corporations’ reported earnings. Correct. Their actions consequently sometimes result in share prices plummeting. Also true. Congress, therefore should do something, pass laws – more laws –, to prevent these abuses. No!

The reality is that the most dreaded Wall Street Wolves in today’s markets are not professional investors – not hedge funds, activist investors, or short sellers – but communities of individuals brought together by social media platforms like Reddit. Reddit is the proverbial Wall Street Wolf in retail sheep’s clothing. Reddit communities, including subreddits like WallStreetBets, themselves are manipulators of share prices that seek to profit, and do, from hype and fiction. (That’s precisely the purpose of social media – to establish groups of like-minded, tribal Wolf Packs.) They accordingly are feared because they can suddenly and drastically disconnect share prices from intrinsic corporate value. Reddit Wolf Packs understandably have found significant support among struggling corporate management teams whose compensation is tied to their companies’ share price. Because Reddit-driven retail investor-buying is monolithic, it can lead – and has led – to massive increases in share prices, most significantly among companies having questionable intrinsic value. This naturally has incentivized corporate executives to court the social media crowd, preferring Reddit communities over Wall Street professionals …, because share price increases inspired by herd action pay more substantial rewards than time-consuming due diligence exercises. No knowledge of corporate analysis or MBA degree is necessary to participate in a Reddit Wolf Pack. The only qualification is a smartphone …, creating an enormous pool of social media-driven capital that can be – and has been – deployed to make concentrated WallStreetBets Wall Street bets. Although not every individual can acquire the knowledge of a Wall Street professional, every American can become a Reddit Wolf.

Reddit Wolf Packs most often target investments made by hedge funds and short-sellers, obvious marks because of their legal obligation to report shares owned by them on a quarterly basis pursuant to Section 13(f) of the Securities Exchange Act. Reddit Wolf Packs’ goal is not to seek removal or replacement of weak corporate managements or to improve corporate operations or reduce costs, but instead to profit by driving up – inflating – share prices of targeted companies. The concerted share-buying by their members creates a short squeeze (resulting in several well-publicized meme stock bull runs), sometimes coupled with the purchase of out-of-the-money call options that add a gamma squeeze to further propel meme share price momentum (where brokers hedge their short call option risk by buying shares, adding brokers’ buying pressure to the buying pressure of the Reddit community). Attractive prey for Reddit Wolf Packs therefore includes value investors who have placed short bets on, or own significant hedged positions in, overpriced stocks – “overpriced” being the key term. Forcing those investors to buy back the shorted meme stock propels share prices to often absurdly lofty levels. The success of the Reddit Wolf Packs has created a new species of Wolf, one that genuinely distorts value, allocating stock market resources to weaker rather than stronger businesses. The financial success of the social media crowd naturally has led to the creation of a Reddit lexicon: “diamond hands” to hold meme stocks for a long time; “stonks” to refer to meme stocks; “rockets” when an Alpha Wolf signals that a stock is about to skyrocket; and “hold the line” when the Pack is seeking to resist selling pressure. The Reddit Wolves’ predatory practices have delighted those company owners and executives who have benefited from rocketing share prices. GameStop, for example, saw its share price climb from $4 in August 2020 to $480 in February 2021. AMC stock went from $2 in January to $60 in June 2021. Bed Bath & Beyond skyrocketed from $12 in September 2020 to $50 in January 2021. The meme stonk list continues to grow.

Meme stonk successes consequently often are based on Reddit hype rather than fundamental economic value. The Wall Street Wolf Packs that do the most damage to America’s corporate financing mechanisms therefore aren’t the hedge funds that profit from buying undervalued companies and hedging their risks by selling overvalued ones. They aren’t the activists who pressure companies to operate more efficiently, thereby increasing market values and maximizing the competitiveness of American industry. They also aren’t the short sellers whose research shines a bright light on companies with concealed problems as well as on those engaging in fraudulent practices (for example, Enron). The tension today isn’t between Wall Street professionals and retail Main Streeters. Wall Street professionals who hedge their investments, engage in activism or pursue a short selling strategy face escalating pressures from corporate managements that can enlist the support of social media to inject capital into their shares, Reddit being a place where investing is a playground for targeting those professionals. The strain therefore is between value and hype, reality and fiction, the market value of a company and management’s portrayal of that value – and social media’s pumping of it – that supports the pyramiding of meme stonk share prices and the consequent misallocation of stock market capital.

Congress is considering new laws to address recent market price distortions, propelled by media reports about the meme stock bubble and by the failure of brokers to adequately monitor risk, particularly in the Archegos blow-up. Its focus, however, is on 20th Century concerns about Wall Street excess …, and not on 21st Century realities. Bubbles, for example, are recurring market phenomena. They make money for some investors and lose money for others. All investors today, however, have equal access to information, and caveat emptor remains a valid investment principle that reasonably should be applied to those who gamble invest in the meme stonk world. Adding laws does not automatically provide enhanced investor protection. The investigation into the Archegos blow-up reached the conclusion that the losses were caused by broker incompetence in monitoring brokers’ margin risk and not by wrongdoing. No legislation can or should deal with poor practice.

Congress therefore is playing to its constituents’ hopes and fears – that is, it is seeking to soothe public concerns rather than enhance the functioning of America’s markets. In doing so, the House has proposed H.R. 4618, which would strengthen Federal disclosure rules by expanding reporting mandates under Section 13(f) of the Securities Exchange Act to require monthly, rather than quarterly, public reporting of investments, increasing the frequency of filings from 4 per year to 12 per year, and reduce the time to prepare those filings from 45 days to 10 days. These changes would provide markets with additional transparency into the shareholdings of large investors …, but would create enhanced regulatory burdens that would have a detrimental impact on the markets. One of its effects would be to provide Reddit Wolf Packs with a flow of information that would enable them to better, and more frequently, coordinate attacks on hedge funds and short sellers, thereby inhibiting the market-driven reconciliation of market imbalances and misallocations. Although H.R. 4618 therefore will be popular with social media constituencies, it would damage the price discovery functioning of markets. Add to that the fact that declining market liquidity already challenges the ability of investors to build and unwind positions – making disclosure rules even more complex and unwieldy would further reduce the ability of investors to initiate and shrink positions. It thus would further reduce the number and capability of investors to positively influence corporate operations and management, creating significant market misalignments. Although interested parties give H.R. 4618 little chance of becoming law, Americans should question whether their legislators should be addressing these types of politically-motivated questions. More laws do not inevitably create better-functioning markets. The opposite all-too-often is true. Statutory efforts motivated by public pressure to “do something” do not enhance the smooth functioning of America’s law-making mechanisms or its markets. They instead throw sand into legislative and regulatory gearboxes. In 2021, that sand is serving as fodder for the Reddit Wolves of Wall Street.