Posted at 08:05h in General by William Natbony 0 Comments

The election in November of Vice President Biden or the re-election of President Trump will not end America’s partisan divisions … its uncivil war.  The Great Partisan Divide will persist.  The genie released by change progress a corrosive combination of social media, automation, rising income inequality, rusting infrastructure, massive government, un-repayable business and personal debts, intensifying nationalism, etc., etc., etc., cannot so easily be put back in the bottle … and certainly not by Inauguration Day on January 20th.  To believe otherwise is a wonderful sentiment …, but utopian.  The Divide cannot quickly or easily be healed, not after a vitriolically-fought Presidential election, the outcome of which a substantial minority of Americans will find unacceptable not accept.  No matter who is President for the next four years, there will continue to be a Partisan Divide … as well as a Congressional Divide … and a Societal Divide …, and a consequent Malfunctional Democracy.  America’s uncivil strife is more likely to escalate than recede …, unless Americans America’s politicians once again come to accept discourse and compromise, recognizing that there are, after all, at least three sides to every argument …, and that those sides are best reconciled by compromise than conflict.

How did America come to this?

The current contentious state of affairs is not an historical aberration.  This is how American politics has been for more than 200 years.  In a republic, there can be no such thing as universal agreement.  There will always be differing viewpoints, differing beliefs, and differing proposed solutions that must be appropriately addressed and, in order for government and society to properly function, reconciled.  That is how democracy was designed to work.  That’s a messy process!  America’s Constitutional democracy even more so.  The U.S. version of democracy has been labeled the Great Democratic Experiment for good reason.  That Experiment will continue only so long as Americans accept the messiness and deal with it systematically, working towards a balancing of disparate interests, and in doing so adhere to America’s essential Constitutional principles.

The partisanship that exists today did not arise suddenly.  It’s been ingrained in American political discourse – and in the consequences of that discourse – since the messy beginnings of the republic in 1792.  21st Century American politics doesn’t differ all that much from America’s politics during the 19th and 20th Centuries – the words may have changed, but the melody remains the same.  Federalism vs. States’ rights, private vs. universal public education, urban vs. rural interests, meritocracy vs. partisan spoils, rich vs. poor, white vs. black, labor vs. capital, and fundamental Constitutional disputes over the true meaning of the Bill of Rights constitute only a few of the hallmarks of disputes littering America’s vigorous democracy – their push-pull is what has made America great … through compromise and balance.  That is what has enabled the American Democratic Experiment to evolve and be so successful.  Opposing blocs of voters periodically take turns moving America gently to-and-fro within the tight bounds of America’s unique Constitutional system.  That back-and-forth nudging has kept America on course as the global hegemon, the world-beater in scientific and technological innovation, the global resource for higher education and knowledge, and the world’s leading economy.  The vitriolic disconnect today between Republican and Democratic voters merely reflects another hurdle for temporarily polarized Americans.  Historically, voters in the U.S. have resisted both far left and far right outcomes.  Americans have had a knack for balancing and rebalancing their politics.  The result has been to never deviate very far from the great middle.  (For example, during the 20th Century, the FDR administration leaned the furthest left – doing so in response to the Great Depression – and the Reagan administration leaned the furthest right – and, in pursuing its conservative agenda, not leaning all that far right).

Partisanship, of course, is not an American invention.  It’s an inbred human trait.  Everyone wants membership in “a tribe” – a tribe of his/her choice – and political tribes eagerly welcome all comers.  The emotions that motivate tribes ebb and flow.  As a consequence, the virulence of partisan tribalism runs in cycles … as it has done throughout history.  The French and Russian Revolutions are but two examples.  Communism and religious extremism are more recent ones.  In the 21st Century, all are nurtured by social media (as TLR previously addressed in November 2019’s “The Widening Divide”).

American political partisanship has waned and waxed … at times to excess during the Republic’s first 200 years … and America survived.  In fact, it thrived.  The Civil War was the most extreme example of poisonous American … partisanship …, but hardly the only one.  The 1930s, for example, was a period of virulent extremism.  Physical violence has been an inextricable part of every nation’s political landscape, a common mode of tribal political expression.  That’s been the reality since the beginning of human history, well before the time of Julius Caesar.  American history has seen its share:  assassinations and attempted assassinations – of Presidents Jackson, Garfield, Lincoln, McKinley, JFK, Ford and Reagan, and of Presidential candidates Theodore Roosevelt, Huey Long, Robert F. Kennedy and George Wallace; duels-to-the-death between national politicians (including Burr-Hamilton, Jackson-Dickenson, Benton-Lucas, Decatur-Baron, Graves-Cilley, and Clay-Randolph); physical violence on the floor of Congress (for example, the 1856 caning of Senator Charles Sumner by Representative Preston Brooks and an 1858 fistfight among ~30 Congressmen); and a litany of both well-executed and barely-foiled political assassinations and attempted murders, beatings and threats at all levels of government.  The media often has played a prominent role in raising tensions and exacerbating divisions.  Rupert Murdoch’s Fox News in supporting Donald Trump had a notable predecessor in Horace Greeley’s New York Tribune – Greeley had almost a quarter century of Republican Party promotional influence.  In short, the 21st Century’s level of partisanship is not new.

Even so, partisan extremism is corrosive.  It corrodes laws and the Rule of Law.  It corrodes law enforcement … the Constitution … the atmosphere Americans breathe … and America’s morale.  It encourages malfunction and all-too-often results in dysfunction.  History runs in cycles … and so does American politics.  A most discerning observer of the American Democratic Experiment, Alexis de Tocqueville, wrote in On Democracy in America that the reason why America’s representative democracy would succeed was because Americans value individual liberty, the Constitution, equalitarianism, and laissez-faire capitalism.  In doing so, he predicted, the American Democratic Experiment would flourish …, though he warned that Americans would have to be perpetually on guard against the tyranny of the majority, the potential for government to degenerate into soft despotism, and the rise of a single religious belief that could overtake secularism.  Those dangers have existed throughout American history … and America has overcome them.  A more recent work, Fragile Democracies by Samuel Issacharoff, warns that in order for America’s democracy to survive, it must rely on a balancing of popular sovereignty, political party cooperation, stable government institutions, an alert media, and a vibrant private sector.  He added to that potent mixture the necessity for ensuring a continuing balance of power among the three branches of government:  the executive, legislative and judicial.  This is the magical formula that has made the Great American Democratic Experiment the greatest of human success stories.  Proper care and maintenance of those ingredients – those unique American Democratic values – provides the means for rebuilding the bridge that once connected all Americans.  It is only that bridge that can successfully span the extreme extremely dangerous Great Partisan Divide.  After all, “A house divided against itself, cannot stand.” 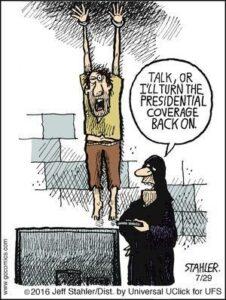