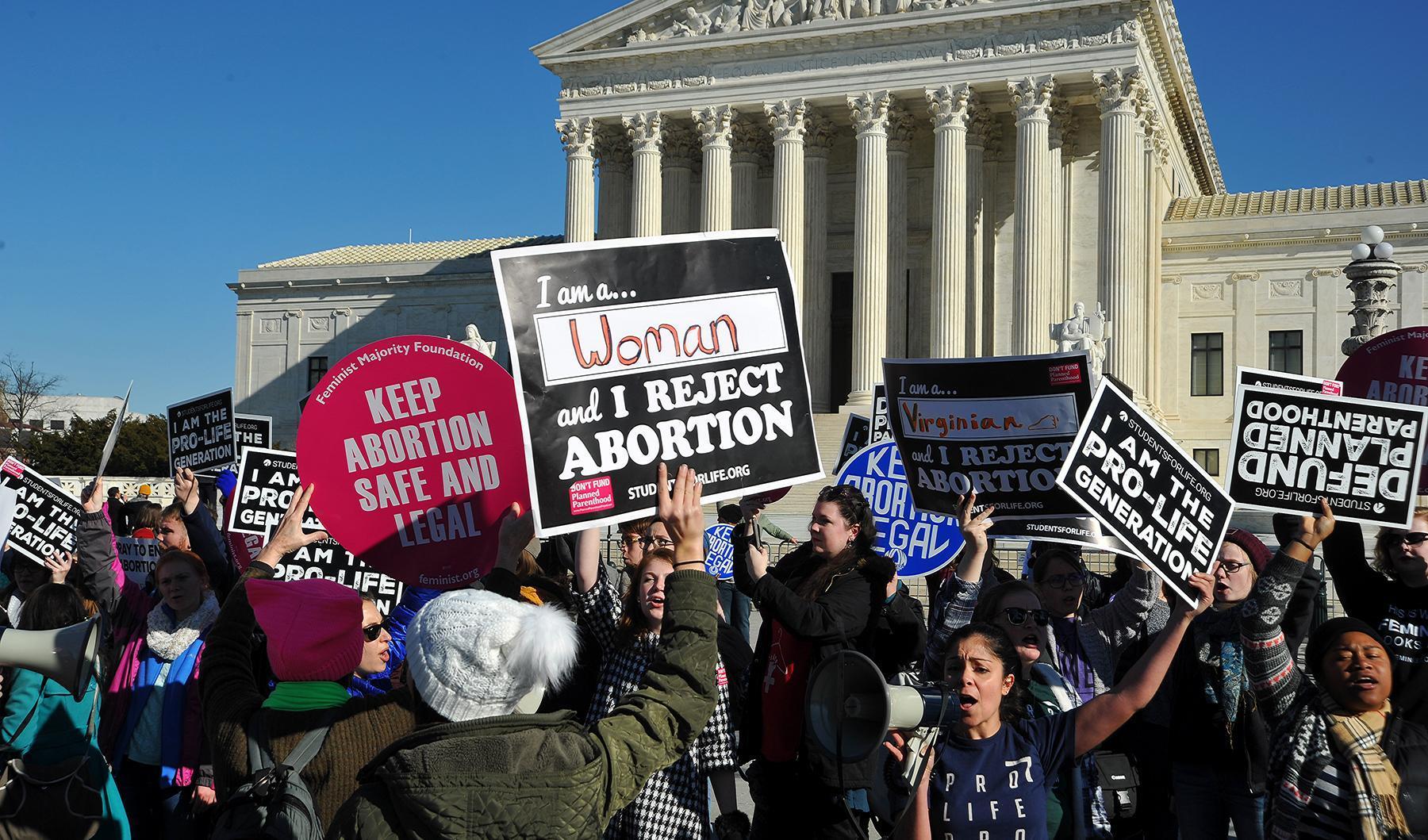 “The Supreme Court once focused on nation-building by prioritizing Federalism over States Rights. Its efforts were highlighted in Roe v. Wade. No longer. States Rights now rule.”
-The Lonely Realist

The Supreme Court’s 1973 decision in Roe v. Wade divided Americans for half a century. It tribalized politics, pitting Americans against Americans. Dialogue was impossible because the two positions were fundamentally irreconcilable. Abortion rights, therefore, became one of America’s defining social, political, and legal questions.

Roe v. Wade established a woman’s right to abort an embryo, characterized by the Supreme Court as a Constitutional right to privacy balanced against protecting the life of the unborn child. The Court used the three trimesters of pregnancy to determine when a fetus should be treated as a “person” subject to Constitutional protection and held that no restriction could be placed on a woman’s right to abort a fetus during the first trimester and (with appropriate medical exceptions) that a State could impose whatever measures it deemed appropriate to prohibit abortions during the third trimester. During the second trimester, the Court ruled that a State could regulate the abortion procedure in ways “narrowly tailored” to protect a mother’s health.

There the law stood until last week when the Supreme Court in Whole Woman’s Health v. Jackson declined to enjoin enforcement of Texas SB 8, the Texas Heartbeat Act, which went into effect on September 1st. The Court didn’t explicitly overrule Roe v. Wade. It did so implicitly. Roe v. Wade is gone.

SB 8 bans abortions after the 6th week of pregnancy, early in the first trimester, and sooner than ~85% of women even learn they are pregnant. In addition to being an overt violation of Roe v. Wade, SB 8 was artfully and ingeniously constructed to block lawsuits that might challenge its constitutionality, doing so by outsourcing law enforcement from State agents to non-State persons who act as vigilantes to prevent individuals, businesses, and charities from promoting, encouraging or assisting with abortions or abortion planning (avoiding application of Ex parte Young, a Supreme Court case allowing suits to enjoin enforcement of a law when a State, and not a non-State person, acts contrary to the Constitution). Vigilantes are incentivized with a $10,000 bounty for each successful litigation, a wrinkle designed to freeze abortion activity since any person – other than a “State person” – is legally empowered to bring a lawsuit. Constitutional challenges to SB 8 therefore must await a successful bounty suit winding its way through the court system, a multi-year process. Meanwhile, abortion activity has come to a screeching halt in Texas … and soon will do so in other like-minded States.

President Trump promised a reversal of Roe v. Wade when he appointed Neil Gorsuch, Brett Kavanaugh, and Amy Coney Barrett to the Supreme Court, all of whom had expressed personal anti-abortion views. Few Presidents have been as successful in delivering on a campaign promise. The anti-abortionist movement seized on the opportunity created by those appointments to fashion State laws that would strangle abortion rights and bring Roe v. Wade to an appropriate Supreme Court outcome. That moment arrived in Whole Woman’s Health …, sooner than many had expected.

Each sitting Supreme Court is defined by its leader, today’s Court by Chief Justice John Roberts, appointed by President Bush in 2005. Chief Justice Roberts is a brilliant jurist, a strict constructionist considered by Court observers to be among the most jurisprudentially conservative Chief Justices in the Court’s long history. He has authored most of the Court’s more conservative opinions, steering the Court in an institutionalist direction intended to ensure a consistent application of the Rule of Law. A cornerstone of the Roberts Court’s jurisprudential conservatism is adherence to the legal doctrine of stare decisis, which is derived from centuries of English common law requiring courts to treat prior decisions as binding legal precedents, not to be disturbed other than to rectify an egregious wrong or to account for changes in society’s understanding of the facts underlying a legal principle. For example, the Supreme Court’s reversal of its 1896 “separate but equal” decision upholding segregation (Plessy v. Ferguson) required the perspective created by two World Wars plus decades of changing attitudes that culminated in a unanimous 9-0 Supreme Court reversal (Brown v. Board of Education of Topeka) that nevertheless created enormous social and political tensions. Concluding that a prior decision is wrong means that those who structured their lives and businesses in reliance on that decision have to readjust, often with adverse personal, societal and economic consequences. Legal predictability and stability are vital elements of America’s success, a cornerstone of judicial (and Chief Justice Roberts’) conservatism, and an integral component of a fully functional national society.

In refusing to hear the Constitutional issues presented by SB 8, the 5-4 majority in Whole Woman’s Health rejected Constitutionally-determinable abortion rights decision-making while simultaneously acknowledging that there are “serious questions regarding the constitutionality of the Texas law,” rejecting Chief Justice Roberts’ dissenting view that by doing so the Court was failing “to preserve the status quo ante” – that is, it was abandoning Roe v. Wade to disparate State law-making. Justice Sotomayor’s dissent was more pointed: “The Court’s order is stunning. Presenting with an application to enjoin a flagrantly unconstitutional law engineered to prohibit women from exercising their constitutional rights & evade judicial scrutiny, a majority of Justices opted to bury their heads in the sand.” Contrary to Justice Sotomayor’s statement, those five majority Justices were not opting to “bury their heads in the sand.” They very clearly have addressed the abortion question head-on, concluding that stare decisis in the Trump Court era no longer carries Constitutional weight.

The ruling in Whole Woman’s Health means that potential violators of any newly enacted law modeled on SB 8 are prevented from challenging that law before being subjected to its legal consequences. There can be little doubt that both Red and Blue States will rely on that precedent to leverage SB 8 for their partisan political purposes – Florida’s legislature already has indicated its intent to do so. Whole Woman’s Health empowers State governments to enact all kinds of unconstitutional laws that apparently can’t be challenged until after they take effect, undermining judicial oversight, stare decisis, and the judicial protections enshrined in America’s balance-of-powers Constitution … as well as America’s national unity and cohesion. States Rights thereby are expanded, and Federalism routed.  Blue States, for example, can pass laws that provide a $10,000 bounty against those who protest against abortion rights or oppose gun control – which would be a clear violation of free speech rights – and Red States similarly could pass laws that grant a $10,000 bounty against anyone who advocates gun control as well as against businesses that require mask-wearing by employees or patrons. The Whole Woman’s Health ruling places no apparent limits on States’ power to vigilante-ize conduct.

This term, the Supreme Court will decide Dobbs v. Jackson Women’s Health Organization, a direct assault on Roe v. Wade. Many Court-watchers expect that the Trump Court will use Dobbs as an opportunity to expressly reverse Roe v. Wade (which reversal would immediately make abortion illegal in 11 states and a felony in at least 2). Whether Whole Woman’s Health and Dobbs do so directly or by a thousand cuts, the era of national abortion rights has ended. Perhaps more significantly, however, Whole Woman’s Health ushers in a new era in American government. States Rights are ascendant, which means that States will now be empowered to go in disparate directions, further fractionalizing America on geographical, tribal, and political grounds. Such an accelerating partisan sundering portends an increasingly challenging future for America and Americans.

Finally (from a Progressive friend) 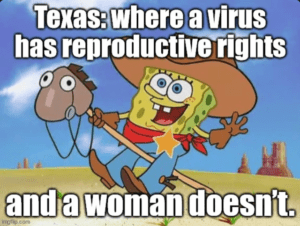