Posted at 08:16h in General by William Natbony 0 Comments

The 13 American Colonies determined more than 230 years ago the kind of democracy they wanted for themselves and their children.  Their Democratic Experiment worked for more than two centuries.  It’s not working now.  Today’s American leaders – and America’s voters – are facing the same decision that the Founders faced in the 1780s:  What kind of democracy does America want?

The Founders adopted a unique form of majoritarian democracy that over the past 30 years has seen whipsawing governments and policies … starting with a 1989-93 Republican government (Bush1), followed by a Democratic one (Clinton), followed by a Republican one (Bush2), followed by a Democratic one (Obama), followed by another Republican one (Trump), and now followed by another Democratic one (Biden).  The consequence has been that America’s democratic process has become …, well, either undemocratic or overly democratic but, either way, unsuccessful.  Americans have been dizzied by a revolving door of government legislative, executive and judicial processes, many driven by partisanship rather than the national interest.  Too often, legislation has been crammed through a Congress riven by arcane Senate rules, their sustainability undercut by offsetting election outcomes.  The most frequently-noted example of disfunction is the Senate’s filibuster rule, which requires a super-majority in some situations but not in others, resulting in Constitutional machinations that the Founders neither contemplated nor condoned.  Philosophically-similar States Rights issues continually contest with Federalism up and down the court system, ad nauseum and, seemingly, ad infinitum.  Do 21st Century Americans truly want America’s 52 51 50 States to be at each others’ throats compete on race rights, voting rights, sex rights, police rights, abortion rights, gun rights, gerrymandering, prison rights, and every other right and wrong that social media and local politicians can stir up?  Is it the desire of Americans to live in a Darwinian democracy where Republicans battle Democrats, States battle States, everyone battles the Federal government, and extremist factions feast on the remains?  If this continues, minimum functionality is the best that can be hoped for … which is a surefire recipe for America’s self-destructive decimation decline in the Axis of the Sanctioned driven (discussed here) globally-competitive 21st Century.

“If it ain’t broke, don’t fix it” is a phrase that, when applied to government, has been attributed to T. Bert Lance, the Director of the Office of Management and Budget under Jimmy Carter.  He added, “That’s the trouble with government:  Fixing things that aren’t broken and not fixing things that are broken.”

America’s Constitution is broken.  It requires fixing, a candid re-examination of how democratic government in the 21st Century can and must work, a return to the principles of union that drove the Constitutional Convention more than 200 years ago, and a process that detaches itself from partisan politicking and the corrosiveness of special interest lobbying.  It should be led by American “doers” … in the mold of Jefferson, Hamilton, Madison and Adams … perhaps by those no longer in government, Bill Clinton, George Bush, Paul Ryan, Bill Bradley …, as well as John Roberts, Joe Manchin, Rob Portman ….

Since ratification in 1788, the Constitution has been amended 27 times by efforts that attempted to address the diverse needs of a geographically-, racially-, religiously-, and ethnically-evolving nation … as well as the changes wrought by massive agricultural, industrial and technological progress.  Those amendments did not refashion the Constitution into an infinitely adaptable instrument of democratic government, an impossible task for a document crafted to address 18th Century issues.

America’s 1788 Constitution was narrowly-drawn as a blueprint for the workings of government, not as a detailed description of those workings.  The Constitution at its core represents a delicate rebalancing of the post-Revolutionary War rights and powers of the separate (and formerly independent) 13 States.  They expressly surrendered some of those rights and powers to the Federal government, retaining what had not been expressly granted … at a time when States themselves were sovereigns with separate armies, separate currencies, markedly different policies on slavery, different populations, different principal religions, separate economic bases, and disparate sets of beliefs.  The American Constitution was the Great American Experiment in Democracy because it delicately balanced States Rights and Federalism and because it tried its hand at power-sharing among three separate, newly-created branches of central government.  Amazingly, America’s Experiment was a resounding success …, but the Constitution, the set of supreme laws that served as the cornerstone for that success, has passed its “best-if-used-by date.”  The last significant Constitutional amendment (the 26th) was ratified 50 years ago.

There are any number of reasons why America needs a new Constitutional framework.  America is not the agrarian society of the 18th, 19th or early 20th Centuries.  With slavery having ended more than 150 years ago, so too should the rationale for a Senate composed of seats assigned two-to-a-State in order to balance slave and free States … and yet entrenched political interests maintain the status quo: 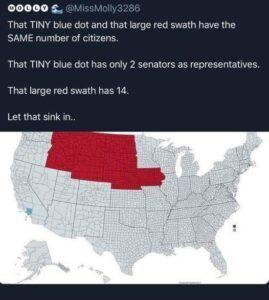 Is this how American democracy ought to work?

As should be apparent to long-term TLR readers, TLR has favored a Strict Constructionist approach to Constitutional interpretation, believing that the Constitution should be read literally and consistently.  The reason for TLR’s belief in Strict Constructionism is not because States Rights should be exalted over Federalism.  Rather, the Constitution is not an infinitely malleable blunt instrument that the Federal courts should use to alter policies adopted by America’s executive and legislative branches.  Legal stability and the Rule of Law – consistency of application and enforcement – is a vital element in a capitalist democracy and an integral component of a well-functioning society.  Laws should not be legislated through judicial activism but by agreement among Congress, the President and a consistent judiciary.  Unfortunately, the inability of Congress and the States to substantively amend the Constitution has led the Federal Courts to do just that by becoming activist … at both political extremes.

Today’s America moreover is exposed to an unprecedented level of global competition and no longer is separated from the rest of the world by oceans that require weeks of fraught travel.  America requires efficient government mechanisms to confront the pressing 21st Century needs of a properly-functioning economy and military.  The Constitution does not further the establishment of those mechanisms.

The Constitution that defined America in the 18th Century is today dividing America.  It does not and cannot address the changes that have occurred over the past 230 years … yet alone the past 30, a period of widening racial, ethnic, religious and political rifts.  If America is not to fail in its third century of democratic experimentation, its Constitution must address the changed reality and, to the extent possible, heal the rifts.  That’s precisely what the Founders had to do …, and did …, in the 1780s.

American Exceptionalism rests on the belief that the United States is a beacon for those who aspire to liberty, equality, individualism, democracy and capitalism.  These principles were embedded in the Constitution by America’s Founders, none of whom was born “American.”  They were the children of those who had immigrated to North America, and the children of children of those immigrants …, and immigrants themselves.  Together, despite their difficult and differing personalities and personal and philosophical animosities, they found common cause and the strength of character to bury their differences, write America’s Constitution and successfully sell it to their new countrymen in 13 disparate States.  That same common cause and those same opposing philosophies exist in today’s America.  Today’s leaders also are capable of finding common cause and of rewriting the Constitution to make it a functional, enduring 21st Century instrument.

Weapons of Constitutional Destruction abound today.  They have found wide use by both Political Parties.  Such use is undermining American politics … and America itself.

Democracies experience periodic crises.  American democracy today is in the midst of what history may record as the greatest democratic crisis. 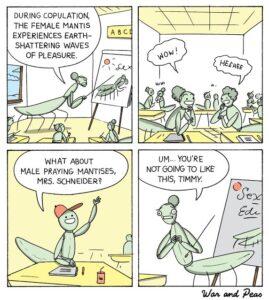 [1] Gun rights are a Federal and not a State-by-State issue (since guns are effortlessly transportable across State lines); the abortion question, on the other hand, should be addressed on a State-by-State basis; the Electoral College is the only way for a two-party, non-parliamentary democracy to succeed; gerrymandering undercuts the principle of majoritarian government (and can be addressed by an agreed-upon algorithmically-driven model); the number of Supreme Court Justices should be fixed and the method by which Justices are selected restructured to ensure the highest quality and a wide distribution of views; America’s determination of whether to be a majoritarian “melting pot” or a haven of Anglo-Saxon ethnicity should be addressed; and gerrymandering (as well as unlimited corporate vote-buying) should be eliminated (sidelining extremists on the left and right).