A political party, that is.

There are currently two nationally-organized political parties:  the Republican Party; and the Democratic Party.  They have been the only parties-in-power in America for over 150 years.  They have denoted America’s two-party political system (symbolized by the Republican elephant and the Democratic donkey), a system that has made American democracy the most successful in history.  It shouldn’t come as a surprise to anyone that substantial credit for that success is Constitutionally-based, grounded in the embodiment of two-party democracy … America’s unique Electoral College system.

And, yes, we’re talking about that unpopular, popular-vote-irrelevancy-creating Electoral College …, a system for selecting American Presidents that for more than 200 years nevertheless has been crucial to the preservation of America’s democracy.  That Electoral College is the reason why the two-party system has thrived persisted, and may well be the reason why America’s Constitutional tri-partite, checks-and-balances democracy (executive, legislative and judicial) has so long endured.

That’s the same Electoral College that many voters today want to eliminate.

The Electoral College system was created in 1804 with the adoption of the 12th Amendment.  Its structure makes it almost impossible for a third-party Presidential candidate to be elected.  That’s because the American electoral system is a “winner-take-all” competition in which the candidate who receives the greatest number of votes wins.  The Electoral College system is a paradigm of that winner-take-all system – in all but two states, whoever wins the most popular votes wins all of the State’s electoral votes in the Presidential election.  There is no reward for a candidate who finishes second, which means that a Presidential candidate must have a national base, as geographically diverse broad as possible.  There is no incentive to create a third party that gets votes but cannot win an election and control a government, whether at the Federal, State or a local level.  As a result, in America two political parties have dominated the plurality-electoral system to the exclusion of third parties.  Even if a third-party Presidential nominee were to garner enough support to prevent other candidates from amassing 270 Electoral College votes, the 12th Amendment devolves the Presidential decision-making to Congress, where a third-party candidate would face the same majoritarian-support issue … and come up short absent a majority in the House and Senate.  The consequence has been a two-party system in which no third party has ever won a Presidential election (Theodore Roosevelt came closest with 27% of the popular vote and 88 electoral votes in the 1912 election) … or, for that matter, even approached receiving a sufficient number of swing votes to become a king-maker in either house of Congress.

Although nothing prevents third parties from forming, the American Electoral College system has been designed to handicap those efforts, from raising funds, to getting names on sufficient ballots, and to winning Electoral votes in universally gerrymandered districts.  At all levels of American government, the electoral rules favor a two-party system and, at least until now, third parties have found it almost impossible to compete.  The Republican and Democratic Parties have controlled State and local governments – and the Federal government – for more than 150 years.  Over time, they have found a variety of means to enhance their joint control, including (significantly in the age of computer data aggregation) by gerrymandering – that is, controlling the selection of voting districts (see https://blog.thelonelyrealist.com/elbridge-gerrys-salamander/ and https://blog.thelonelyrealist.com/insider-trading-revisiting-eldridge-gerrys-salamander/).

But change has come to American politics.  With internal Republican and Democratic Party disagreements having slowly eroded internal political party cohesion over the past decade(s), change is likely to accelerate …, with some Republicans – known as Never Trumpers and, earlier this Century, as Tea Party Conservatives – adhering to traditional, conservative Republican values, while others have embraced the personality cult of Donald Trump and Trumpian policies.  There are signs of a similar potential split in the Democratic Party as well … between mainstream Democrats and the Party’s Sanders-nista Wing.  Battle lines are today being drawn (with nobody’s right when everybody’s wrong – with thanks to Stephen Stills), portending what may be a tumultuous realignment of politics, policies, political allegiances … and democracy in America.

Where are the dividing lines?  What are the policies, and values, of each of the two four existing and emerging political movements?

American politics over the past 100 years have been defined along five principal fault lines (along with any number of more narrowly-drawn ones):  (1) social policy; (2) fiscal policy; (3) foreign policy; (4) Constitutional construction; and (5) Federalism versus States’ Rights (which previously were addressed in part by TLR in https://blog.thelonelyrealist.com/what-is-a-conservative-and-what-is-a-liberal/).

Traditional Democratic politics have favored (1) a social policy grounded in individual liberty with minimal government interference in the lives of Americans (a cornerstone of libertarianism), but only to the extent that those liberties do not endanger the welfare of other individuals, (2) a liberal fiscal policy that utilizes progressive tax rate structures and deficit spending in taking an activist approach to redressing perceived racial, economic and class inequality, (3) a focus on global leadership coupled with a powerful American military actively engaged in international alliances, (4) an approach to Constitutional construction that favors judicial activism, taking a “living Constitution” approach to a changing world, and (5) an active problem-solving role for government with Federalism dominating over States’ Rights.

Traditional Republican politics have favored (1) a social policy grounded in individual liberty with minimal government interference in the lives of Americans (a cornerstone of libertarianism), tempered by adherence to traditional American values that focus on marriage, sexuality and adherence to Judeo-Christian religious tenets, (2) a fiscal conservatism based on low taxes, limited government, modest government spending, balanced government budgets, and minimal government debt, (3) a globalist/internationalist approach to dealings with foreign countries, strong democratically-centered military alliances, free trade, and retention of a powerful armed forces with global reach, (4) strict Constitutional constructionism, and (5) a balance between small-government Federalism and States’ rights.

Trumpism is a recent political movement founded on nationalism, working class populism, and perceived disenfranchisement by traditional political parties and government institutions.  It favors (1) a social policy based on religious, racial and national origin differentiation with government support for Judeo-Christian limitations on targeted individual rights, (2) low taxes and limited government regulation coupled with activist, interventionalist government economic and business policies and historically-high government spending financed by increased government debt (a practical application of Modern Monetary Theory), (3) a foreign policy of isolationism and unilateralism (“America First”), characterized by a withdrawal from globalism, global trade and international alliances, (4) strict Constitutional constructionism coupled with a broad, far-reaching interpretation of executive power, and (5) a mixture that favors States’ rights in certain policy applications and Federalism in others.  The Economist recently editorialized that “After his victory in 2016, Trumpism looked like a rallying-call to the economically distressed.  Mr. Trump fought his [2020] campaign on his claim to have built ‘the greatest economy in the history of our country.’  A mixture of isolationism, cronyism, nativist rhetoric, somewhat performance authoritarianism, corporate tax cuts and personality cult, Trumpism is what the president says it is.”  In short, “Mr. Trump has transformed the right.”  Over the past four years, he also has transformed the Republican Party.

Sandersnista-ism is a form of democratic socialism championed by Vermont Independent Senator Bernie Sanders that is patterned largely on the European model.  It favors (1) social libertarianism, (2) taxing the wealthy in order to (among other policy goals) eliminate economic and social inequality, address climate change, create a minimum national income, and provide universal healthcare without regard to the resulting deficits (an application of Modern Monetary Theory – see “Will Modern Monetary Theory Work” in https://blog.thelonelyrealist.com/4-15-19/), (3) a powerful American military engaged in international alliances on a global basis pursuant to policies more closely overseen and approved by Congress, (4) an approach to Constitutional construction that favors judicial activism over strict constructionism, and (5) Federalism dominating over States’ Rights.

The 2020 Presidential election was decided on the basis of media characterizations … and mischaracterizations – that is, on the personality traits painted onto each candidate – rather than on each political Party’s underlying policy positions.  Except for polls taken on an issue-by-issue basis – and polls today necessarily must be taken with a very large grain of salt! –, it therefore is unclear where Americans stand on the issues and in their support for the political Parties that favor them.  As a consequence, the degree of support for traditional Republican, traditional Democratic, Trumpian and Sandersian platforms can only be guessed at.  With President Trump apparently having decided to remain in the political limelight and campaign for re-election in 2024 (earlier this week, he launched his own “Save America” PAC, the contributions to which he intends to use in part to challenge the 2020 election results and in part to influence elections over the next several years), the creation of political parties other than traditional Republican and Democratic ones cannot be ruled out.  Neither can any resulting political turmoil and the effect on America’s Constitutional democracy.  President Trump will continue to adhere to his populist platform by challenging every possible permutation  of “the deep state.”  If further evidence were needed, his recent Tweet about the status of vote-counting made his position clear:  “The recent statement by Chris Krebs [his former appointee as director of the Cybersecurity and Infrastructure Security Agency that oversees the electoral process] on the security of the 2020 Election was highly inaccurate, in that there were massive improprieties and fraud – including dead people voting, Poll Watchers not allowed into polling locations, ‘glitches’ in the voting machines which changed votes from Trump to Biden, late voting, and many more.”

The 2020 election therefore may lead to a fracturing of America’s historic two-party political system, with multiple parties advocating a confusing mix of made-for-media policies in their fight for voter support over the next number of years.  It may be that the fighting will sort itself out once again into a two-party race … or it may be that political party alliances and coalitions will form (much like the alliance of Never Trump Republicans and Sanders-nistas who joined with traditional Democrats in opposing President Trump and electing Joe Biden) … or it may be that new parties arise to challenge the historical dominance of Republican conservatism and Democratic liberalism.  If the latter, Americans therefore may be approaching a time to … pick a party! 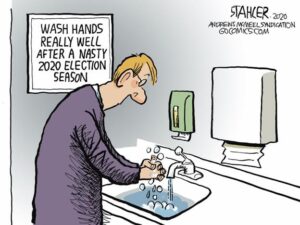