Well … no, not really. And there are good reasons why that’s so.

You see, there is no “insider trading law,” no legislation that defines “inside information,” or that defines “material” or “nonpublic,” or that even says that trading on “inside information” or “material, nonpublic information” is illegal. The law, such as it is, is judge-made in an effort to define acts that should be punished as “securities fraud.” The courts have had limited mixed success in doing so. Their most recent pronouncements are confusing and apparently require that, in order for insider trading to constitute “securities fraud,” the material, nonpublic information must have been received by the perpetrator accused alleged fraudster from someone who breached a duty of trust – an insider –, the insider had to have received a benefit from doing so, and the perpetrator accused alleged fraudster who traded on that inside information had to know that there was such a breach and a benefit.

I trust that was clear.

Perhaps a few examples will help, though I doubt it.

If a corporate employee gives a friend inside information about his company (“the earnings announcement will be BIG”) and the friend then trades profitably on that information, neither will have committed illegal insider trading as long as the employee doesn’t derive a “benefit” from the tip. Similarly, a hacker who exploits a weakness in a company’s computer code (for example, by hacking into a law firm’s database, which is itself a crime) apparently will not have committed “securities fraud” if she trades on the inside information revealed by her hacking. As a further wrinkle, a hedge fund will not be trading on inside information if it stations employees outside a company’s nationwide offices to count the number of employees and products going in and out, every day, for months at a time, and also hires local waitresses to quiz employees about the amount of work they’ve been doing (all of which information is both material and nonpublic – after all, nobody else in the world will have access to that information). And other hedge funds will not be trading on inside information if they receive microsecond-by-microsecond price and share-trading data before everyone else (those who do so are the “high frequency traders” who were the subject of Michael Lewis’s bestseller, Flash Boys).

Well … no, not really. If we were, then we’d be ahead of the courts. They continue to wrestle with a multitude of difficult insider trading cases, although they appear to be on their way to punishing only those who truly are crooks – those who demonstrably conspire with corporate insiders for their mutual profit.

Professional traders, on the other hand, are in the business of finding and trading on information that is both “material” and “nonpublic” … and that’s not illegal … even though it gives them a huge edge over others. There are any number of ways that market professionals gain advantages over the general public. The markets are not egalitarian … and they shouldn’t be. The smartest people who trade stocks, bonds, derivatives and commodities 24 hours a day, 6-1/2 days a week, ought to have an edge over the amateurs … and what they’re doing should not be treated as “insider trading.” The amounts invested by pros in eliciting information and developing technology multiplies their advantages, just as money always has. In 1815, Nathan Rothschild used trained carrier pigeons – the early 19th Century’s costly high-tech –, to learn the outcome of the Battle of Waterloo … which made him a fortune. Modern Rothschilds are doing the same today. To paraphrase Adam Smith Charles Darwin Ecclesiastes, the race is not always won by the swiftest or the battle won by the strongest …, but that’s the way to bet.

Perhaps Congress should find a way to level the playing field?

Well … no, not really. It’s impossible to create a level playing field between professionals and amateurs. Markets – whether for vegetables or beads or stocks – are Darwinian by definition, and there is no way to prevent human beings from looking for, and finding, advantages.

The courts therefore have struggled in drawing the line between the bad guys … and the capitalists. They’ve become inured reluctant to hold accused violators liable without a finding of demonstrable fraud. Take the case of C.B. Lee, a former analyst at Steven Cohen’s hedge fund. He pled guilty in 2013 to insider trading because he believed that, at the time he received certain information, he should have realized that it probably came from an insider … but then the law changed (in a 2016 Supreme Court decision) and what he had pled guilty to no longer fell within the new judicial definition of insider trading. He therefore appealed to have his guilty plea vacated – imagine how confusing the law has to be for someone to plead guilty to a felony and then be told by the Supreme Court that what he did actually was fine. You see, he’d been tipped by a friend at another hedge fund, but didn’t have actual knowledge that his friend’s sources at two public companies hadn’t benefited by divulging that inside information. That is, a “tipper” of inside information must receive a “personal benefit” in order for the information received by a “tippee” to be treated as “inside information.” Who knew? The Second Circuit court judge vacated Mr. Lee’s guilty plea.

Are things getting clearer now?

Did you know that every time you or any other investor places a stock market order, within milliseconds, that information is available to high frequency traders who immediately trade on that material, nonpublic information? You and other retail investors never have the money to afford access to that information, which is quite valuable (as is demonstrated by the profits HFTs derive from trading on it). How about all the research professional investors purchase have access to about truck traffic and plane deliveries and train schedules and merchandize inventories and … everything else? Retail investors don’t have access to that information. Did you know that when Occidental Petroleum was putting together its bid for Anadarko Petroleum, professional traders were able to front-run the public announcement because they had tracked Occidental’s private jet and were able to piece together the fact that Warren Buffet was financing a large chunk of Occidental’s then unknown but very material bid for Anadarko? Those professional traders were smarter than the general public … and used that inside information to their substantial benefit. Modern Rothschilds indeed!

Retail investors are outgunned and out-thought by professionals … and no amount of insider trading law is going to change that reality. The courts have done their best to deal with the fraudsters, but they’re not supposed to be making the law. Recognizing this reality, former U.S. Attorney Preet Bharara and SEC Commissioner Robert Jackson recently created a task force to propose new insider trading laws. Although their efforts are laudable and, if their ideas become law, undoubtedly will help prevent bad guys from profiting from insider trading, nothing will level the playing field for retail investors.

It would be wise for members of the general public to remember that.

The April 24th TLR discussed the pros and cons of political gerrymandering. In Rucho v. Common Cause, the Supreme Court in a 5-4 decision held that political gerrymandering is Constitutional. The Court therefore left the task of districting, redistricting and gerrymandering to State legislatures … and not to Federal courts. Republicans and Democrats are now free to kill go at each other at full throttle, no holds barred, in all fifty of the United States … which is precisely what Democrats and Republicans intend to do. Whichever party can gain control of local Statehouses in 2020 will be able to gerrymander voting districts to their benefit. Austin Chambers, president of the Republican State Leadership Committee, is enthusiastic: “We’re going to make sure we do everything we can to influence the elections because the future of the party … depends on it.” Former Obama Administration Attorney General Eric Holder, who chairs the National Democratic Redistricting Committee and who previously argued against partisan gerrymandering, is equally motivated. There no longer is any question about State legislatures drawing “fair” or “diverse” Congressional districts. Partisan gerrymandering is the Law of the Land. In the words of Justin Levitt, an election law expert at Loyola Law School, “History has shown that both major parties are perfectly willing to rig the electoral rules to benefit their own.”

The 2020 elections therefore present a tremendous employment opportunity for recent college graduates. To paraphrase Professor Levitt, grads should consider a future in rigging the electoral rules to benefit the party of their choice … together with a subsequent career in the rewarding world of politics. Opportunities in new industries like this are rare and hopefully come only once in a lifetime! 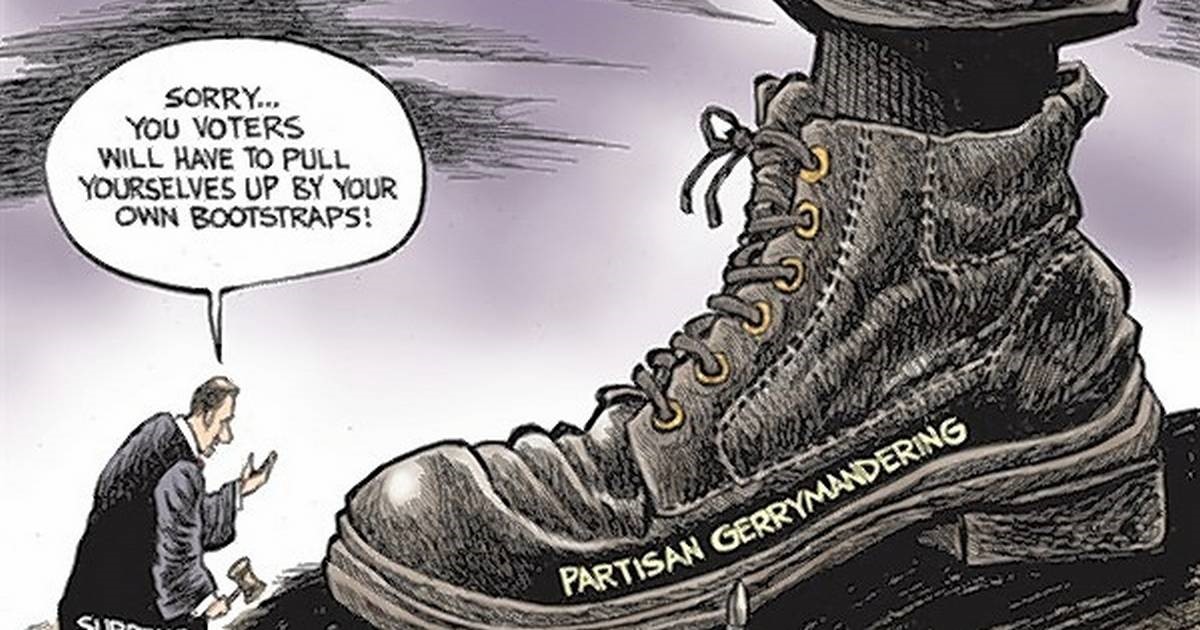 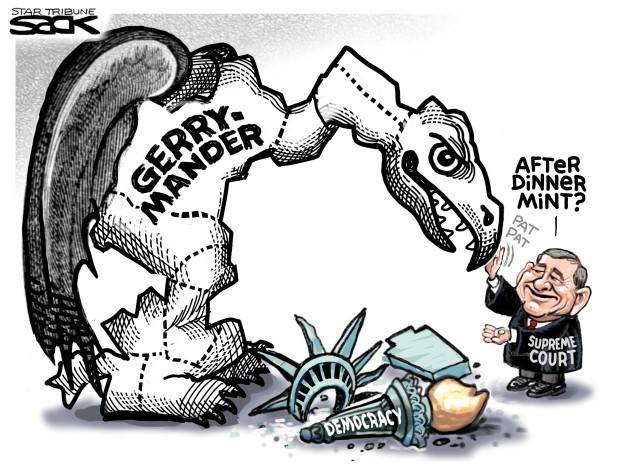