There are a host of reasons why America should reinstitute mandatory military service … or, more realistically given the public’s resistance to the draft, adopt mandatory national service.  A specific national governance reason stands out.

Americans today are divided by so much …, from politics, race, regionalism and income inequality, to gun rights, abortion rights and just about everything else.  The one thing Americans agree on is that there should be no military draft.  More than 80% of Americans in poll-after-poll and year-after-year are adamant in their opposition … and that opposition most certainly is greater today after years of seemingly interminable wars in Afghanistan and Iraq and with America’s military stationed across the globe …, alphabetically from Afghanistan to Qatar and, geographically, from South Korea to Lithuania.

But consider the facts …

… and begin with national governance, particularly Congress.  The five decades after WWII saw a super-majority of those elected to Congress (out of a total of 537 Congressmen and Senators) having been former members of America’s military.  Those veterans knew how to work together and understood the importance – the essentiality – of prioritizing America’s interests while subsuming their own and their constituents’ crass pecuniary, political, and personal interests.  Their military training had taught them the value of cooperation, that compromise is good because success is about finding solutions and avoiding extremes, and that democracy itself and America’s experiment with Constitutional democracy requires a delicate balancing and constant effort.  They understood that they were in service to America, doing so for the long term to secure American values for future generations … and not only for their gerrymandered political districts (previously discussed here).  That changed in the 1990s, a change that became pronounced during the first two decades of the 21st Century when the number of military veterans in Congress (as well as in State and local government) declined precipitously … as the chart below glaringly illuminates: 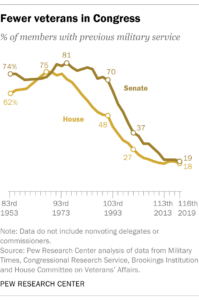 The military teaches a variety of skills-for-living, and not only ones that are necessary in government service.  These include teamwork, leadership, responsibility, self-sufficiency, the importance of effective and accurate communication, integrity, familiarity with technology, and an ability to perform under pressure – all nice to have in elected officials charged with running the country!  Those skills are in addition to learning to work cohesively with other members of the military whose backgrounds and views differ across a broad melting pot spectrum – who have different political allegiances, are members of different races, religions and ethnicities, are from different parts of the country, from different economic backgrounds, and have different opinions on gun rights, abortion rights … and just about everything else.  And they’re forced not only to get along …, but to work together for the common good, the betterment of the nation.  Where else can those skills be taught … and learned?

With today’s volunteer military, that array of skills is being taught only to volunteers and is not being inculcated into America’s succeeding generations.  Military volunteers come primarily from rural, lower-income, and lower-skilled backgrounds.  One-third fail to complete their initial enlistments.  It’s no surprise that, unlike prior generations of veterans, few seek elective office after their service and few seek government service and the opportunity to spread the learning of their military experience to America’s governments and governmental agencies.  Is there any wonder that America’s politics is in disarray, that America is divided, that partisanship dominates discussion, and that America’s democracy has lost its way?  Perhaps America would have tired more quickly of its wars in the Middle East had conscripted Americans been serving …, or perhaps America would have more actively pursued those campaigns and better coordinated its global alliances with more focused attention and resources?

There are other cogent reasons for reinstituting a military draft, including that it’s unfair to burden a tiny percentage of less-advantaged Americans with fighting and risking their lives for the other 99+%, that military service educates Americans about foreign lands and other peoples’ ways of living, thinking and addressing problems that impact Americans, that military service might be the best way to rehabilitate youthful offenders to set them on the right path, and that a draft would be the optimal means of effectuating the “melting pot” practices that, over the past 230 years, have made America uniquely successful and powered America’s singular brand of democracy.

There also are cogent reasons not to impose mandatory military service, including that the military exposes its members to horrific experiences that often result in dysfunctionality upon return to civilian society.  That was a primary reason why a 2011 Pew survey found that a greater percentage of returning veterans opposed the draft than does the general public.  Furthermore, a draft would disrupt the workforce, redirecting America’s youth to pursuits that could create a burden on the overall economy.  A military draft also would require significant additional government  expenditures on training and compensating draftees resulting in higher taxes and larger budget deficits, and the redirection of American manufacturing to clothe, arm and feed increased military forces.

The last military draft, the fourth in American history, was instituted in 1940 as a peacetime mechanism to enhance American preparedness for war as the threat of German U-boat actions in the Atlantic and Japanese aggression expansion in the Pacific became too threatening to ignore.  America’s readiness efforts in the end were remarkably timely (although historians have pointed out how close the outcome truly was).  Military conscription continued through the Korean and Vietnam Wars and was terminated some 33 years later, on January 23, 1973, the day the Vietnam peace accords were signed.  The Inconvenient Truth is that America is a lesser nation as a result of terminating mandatory conscription (although the law continues to require all American males between the ages of 18 and 25 to register with the Selective Service System).  The consequences of ignoring the benefits of national service should reverberate on both sides of the partisan divide political aisle.  Democrats and Republicans alike should revel in the benefits that mandatory national service would provide, particularly for America’s youth who would receive compensation-for-services and the economically-beneficial training their national service would require.  Those benefits and opportunities would be especially welcome in the soon-to-be post-Covid-19 world, following hard on the heels of interrupted educations, jobs and careers.  With universal service, America’s youth also would receive the educational, healthcare and financial benefits currently provided to veterans …,, in effect, universal-basic-income-for-those-who-served-America and Medicare-for-all-those-who-served-America.  Fiscal conservatives should savor the economic boost provided by technology/jobs-training and veteran-specific funding – a distinct improvement over writing trillion dollar checks to all categories of Americans –, and foreign policy conservatives should find significant comfort in the enhanced security and operational latitude that universal national service would ensure.  Not to be overlooked would be a revitalization of the American Dream – mandatory national service would provide ongoing generations with all-important skills in teamwork, leadership, responsibility, self-sufficiency, and integrity .… and thereby also promote the skills needed to maximize government functionality.

Only a few countries currently require military service for their citizens – Israel is a notably successful example –, but no country today requires a combination of universal military and government-sponsored service.  Universal national service nevertheless would provide America with a means of bridging the political, social and jobs-training-and-skills chasm that currently separates Americans from each other …, and also separates America’s elected officials from the national interest.  Those reasons alone mandate a serious consideration of universal national service.  The means of adoption have been comprehensively explored by others who have recommended a variety of approaches.  TLR is not a forum for the “how.”  It is a forum for the “whether.”  Unfortunately, like much else in America today, a national service draft would challenge conventional politicking.  It nevertheless needs to be pursued …, and should become a political imperative.  That’s an Inconvenient Truth. 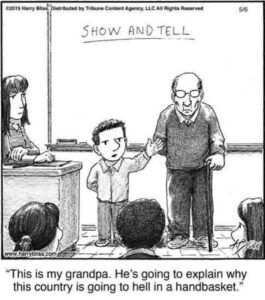