Posted at 14:16h in General by William Natbony 0 Comments

The internet provides valuable learning tools for children and young adults. One such tool is gaming. Online gaming encourages critical thinking that can improve skills and promote leadership and team building. It’s so effective that it’s used by both educational institutions – to teach basic skills such as mathematics and biology as well as more advanced ones like physics and economics – and commercial purveyors of entertainment. The industry’s enormous success has meant that the internet is awash with edifying gaming choices, many creating virtual realities to focus players on building specific skill-sets and motivating them to master ever-higher levels of difficulty. The internet today boasts any number of highly-developed virtual reality worlds – “real fake realities” – with storylines that evolve in real-time, with populations of “authentic” cybernetic characters who are almost indistinguishable from real people and who work together with players to solve problems and overcome challenges. This near-reality makes it difficult for players to distinguish between what is real and what is virtual. Online simulacra after all are intended to emulate human actions and interactions. By both aligning and competing with their human counterparts, they create bonds and establish common interests, teams are built and allegiances develop. Internet gaming, therefore, is a social experience with simulacra communicating in the same ways as real-life friends and rivals, using smartphones, email, video, and text. They often add comedic elements for depth and dimensionality. Successful relationships and interactions result in rewards, often represented by game tokens that can be used to acquire prizes that have virtual-world utility.

Unfortunately – for gamers, at least –, gaming is addictive. Gaming companies’ goal is to hook players and make them return over and over again (which has led Chinese regulators to limit children’s usage to three hours/week). In doing so, their reward systems promote psychological dependence. Their predictive computer codes lead players back, providing programmed random reinforcement in psychologically subtle and more addictive ways than the programs used in Vegas’ slot machines. Online games add excitement to learning and play, a type of volatility that shapes brains and molds behaviors …, especially among those young humans whose brains are still developing. Children who grew up with online gaming in the late 20th and early 21st Centuries and who are now in their 20s, 30s, and 40s naturally seek and have found mature pursuits to substitute for their childhood gaming. You know them as … Robinhood Markets, where adults (from college age on) can trade leveraged options on their smartphones, Coinbase and its cryptocurrency competitors, where they can buy and sell virtual currencies, internet art sites like Opensea, where they can play pricing games with non-functional tokens (NFTs), subreddits, particularly WallStreetBets, where they can group together with like-minded gamers for social, philosophical and comedic purposes to act in concert in running up the prices of meme stonks – using reassuring emojis reminiscent of their childhoods (that is, abridging their communications using tiny avatars), and stock markets (the largest casinos in the world), where they can trade blank-check companies (SPACs), FAANGs, and a wide variety of other securities … all the while in the secure belief – confirmed by the experiences of the last dozen years – that highly-leveraged options, cryptocurrencies, NFTs, meme stonks, SPACs, FAANGs and stock markets themselves can only appreciate in value. Their entire financial markets experience echoes with their memories of childhood internet gaming, including when they receive tokens – whether cryptos or NFTs or SPAC shares – that can be used to acquire online prizes (like the fractionalized picture of an NFT dog).

Until the last several years, retail investors were comfortable storing their savings in banks and investing through mutual funds. They welcomed safety, simplicity, and security. Many remembered being burned by the bursting of the dot-com bubble in 2000 or by the 2008-09 Great Recession. They embraced passive investment options – value and growth stocks rather than meme stonks. That’s not so today where investors are enjoying riskier, more volatile, and newer forms of investment. Their focus has been on how to rapidly achieve greater returns. As a consequence, financial, crypto, and related markets have become 21st Century lottery tickets that offer retail investors the same type of action they experienced with virtual gaming. Investors’ observations over the past dozen years confirm that playing 21st Century financial games is both easy and fun: Prices naturally and consistently move from the lower left to the upper right. Corrections invariably resolve themselves with profitable rallies. Moreover, retail investors have found that the internet provides the same types of gaming experiences as the virtual worlds of their youth with a similar range of social interaction and comedic opportunities. Today’s financial gamers’ successes have led them to increase their risk to add additional excitement and reach higher levels of difficulty. Many have achieved incredible rates-of-return … and had more fun doing so than they would have had in Vegas.

Markets, however, cannot forever go from the lower left to the upper right. Economic cycles have not disappeared. Value matters. As David Einhorn observed, “Bubbles tend to topple under their own weight. Everybody is in. The last short has covered. The last buyer has bought…. The decline starts and the psychology shifts from greed to complacency to worry to panic.”

Adults understand that virtual gaming tokens have no value. Many investors today, however, believe that dog images, comedic cryptocurrencies, meme stonks, SPACs, and other hyped investments are not mere tokens, that they have an intrinsic value detached from fundamentals. Charles MacKay in his 1841 classic, Extraordinary Popular Delusions and the Madness of Crowds, highlighted one company during the famous South Sea Bubble that described itself as “an undertaking of great advantage but nobody to know what it is.” That description resonates with the promotional materials of blank-check companies, a number of cryptos, meme stonks, and NFTs. Each is a virtual-world token that has taken up temporary residence in the real world.

Regulators are well aware of the potential these seemingly valueless, non-growth tokens present for economic disaster. With respect to cryptocurrencies, Riksbank Governor Stefan Ingves has said that “Private money usually collapses sooner or later.” Banxico Governor Alejandro Diaz de Leon has added that “Whoever receives Bitcoin in exchange for a good or service, we believe that [transaction] is more akin to bartering…. People will not want their purchasing power, their salary to go up or down 10% from one day to another. You don’t want that volatility for purchasing power. In that sense, it is not a good safeguard of value.” And SEC Chair Gary Gensler has warned that crypto is the “Wild West…, rife with fraud, scams, and abuse in certain applications. If we don’t address these issues, I worry a lot of people will be hurt.”

A prime example of a “popular, online delusion” is the $4 million sale in June of a non-fungible token (NFT) representing an image of the original Shiba Inu Dogecoin. It didn’t sell for 4 million US Dollars, but for $4 million worth of the Ethereum cryptocurrency – a token for a token. That type of barter is familiar to gamers. Perhaps its value arose from the fact that this specific Doge had won the Know Your Meme’s “Meme of the Decade” award in 2019(?), though that still made it merely an attractive image of a dog without copyright or uniqueness. Nevertheless, only three months later that dog NFT had multiplied in “value” to more than $225 million after nearly 17 billion fractionalized tokens named “Dog” were sold in exchange for over 11,000 Ether, another token-for-token exchange. And then the value of that Dog NFT again doubled the next day … before falling back to earth the following week. As Matt Levine put it, purchasing the Dog NFT means that “You don’t own the picture of the dog, you don’t own [a percentage] of the dog, it is just, like, you come in every day and someone is playing a new weird game and you try to get the high score in today’s game and tomorrow will be a different game.”

Do NFTs make good investments? At times, yes they do … but only if players choose to sell them at an appropriate moment for “real money.” They prove the adage that investors should “buy bubbles early and sell them when they can and not when they have to” (an application of the greater fool theory). What about blank-check companies and meme stocks like GameStop and AMC, each of which is promising an “undertaking of great advantage but nobody knows what business it really is in”? They do sound an awful lot like South Sea bubblers. With Robinhood being an online casino for small investors, might SEC Chair Gensler choose to duplicate an approach taken by Chinese regulators and announce that “You can only play Robinhood three hours a week”? Although that might adversely affect the price of Robinhood stock, would its players users care as long as they were allowed to go wild during those three hours? Finally, even though cryptocurrency tokens are not today real money, they are virtual bartering chips that can be used to purchase virtual assets …, and, if the timing is right, they too can be cashed in for “real money.”

These are the games people are playing in 2021. Unless the business of America is casino gambling, however, they are not fuel for America’s economic growth. 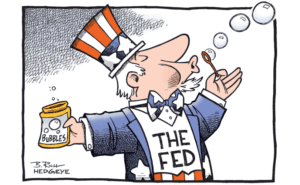