The enactment by the Biden Administration of the $1.9 trillion American Rescue Plan (ARP) was a victory for labor over capitalists capital, one that many Americans believe created unintentional consequences for American businesses.  Those consequences, however, were very much intended.  They are an integral part of the Biden Administration’s efforts to restore equilibrium between labor and capital – what many believe to be at the core of income inequality.  But there’s more:  The ARP also is ingeniously designed to accelerate wage inflation (albeit temporarily) … and is doing so in ways that many analysts similarly consider to be accidental.  That inflationary design, too, was no accident.

Republican Administrations favor capital over labor … or capitalists over laborers.  Democratic Administrations, on the other hand, favor labor over capital.  The two Political Parties recently collaborated to support labor (the new “working class politics”) when the Republican Senate passed the $900 billion Coronavirus Response and Relief Supplemental Appropriations Act (CRRSAA) signed by President Trump on December 27, 2020 and the Democratic Congress passed the $1.9 trillion ARP signed by President Biden on March 11, 2021.  The total of the two stimulus bills is more than 3.5x the size of the derided Obama Administration’s derided $800 billion of spending increases and tax relief that followed the Great Recession of 2008-09, the primary goal of which was to save existing jobs and create new ones.  The CRRSAA-ARP’s goal is neither to save nor create jobs (and is in addition to similar stimulus contained in the $2+ trillion CARES Act and the injection into the U.S. economy by the Federal Reserve of a further $3+ trillion).  To the contrary, it is intended to inhibit – yes, truly slow down – job creation and a return-to-work by funneling increasing financial support to out-of-work Americans.  To do so, the ARP tops off the $600/person stimulus of the CRRSAA with an additional $1,400/person to reach the $2,000/person level originally targeted by President Trump …, and temporarily adds unemployment and food stamp benefits, debt relief for renters and homeowners, subsidies for State and local governments intended to be passed along to constituents, a bailout for pension funds, healthcare subsidies, and an increased and expanded childcare benefit – all of which have the explicit goal of putting cash in taxpayers’ pockets.

Politics has made strange bedfellows!

Because the combined CRRSAA-ARP stimulus will send monthly checks to tens of millions of American families, many workers will be receiving more money for not working than they would have received had they returned to work.  The combined stimulus package therefore will be taking a fair number of workers off the market during a time when (primarily) service businesses already are facing a worker shortage, which means that those businesses will have to offer higher wages to attract workers …, which is an indirect means of increasing wages.  There is irony here:  Congress rejected the Biden Administration’s proposed $15/hour minimum wage and yet enacted a stimulus-and-subsidy package that may effect an even larger overall wage increase.  This worker supply-demand imbalance is a classic trigger for the type of wage inflation that characterized prior inflationary periods.  It is cut from the same cloth as the inflationary measures used by the Federal Reserve for the past 12 years – after all, increased inflation has been an outcome dearly sought by America’s government since 2009 (a subject most recently discussed by TLR in “This Time is Different – A Redux” here).  Moreover, CRRSAA-ARP will have the additional – and intended – consequence of transferring economic benefits from employers – the “capital” in capitalists – to laborers, an effective rebalancing of economic benefits that will narrow a widened income gap.

Karl Marx provided an analytically-robust explanation of the push-pull between labor and capital, describing it as a class struggle to determine how economic spoils are divvied up between those who do the work and those who finance the work.  Marx’s Das Kapital has as much application to labor and capital in the 21st Century as it had in the 19th.  Laborers by definition outnumber capitalists.  In America’s democracy, they cast critical votes.  As economic cycles wax and wane, disparities in wealth, living standards and power also wax and wane (today often defined by the Gini coefficient), at times reaching uncomfortable intolerable levels.  In today’s fraught American politics, Democrats and Republicans each have tapped into laborers’ resentment arising from those disparities.  The Biden Administration is taking its turn at addressing that discomfort by reducing the supply of labor to drive up labor costs (and also encourage unionization) and running the Dollar printing press at full speed to provide new Federal entitlements to low-income workers …, fueling wage and price inflation with the goal of reducing perceived … and actual … income inequality.

Although income inequality in America today is uncomfortable, it is not intolerable.  Intolerable inequality leads to revolution.  America nevertheless has been experiencing a disquieting resentment that has begun to spill over into violence.  That resentment has as one of its underpinnings the accession of capital at the expense of labor.  It is worth noting that, according to the Federal Reserve, U.S. household wealth nearly tripled between 1989 and 2016 … with the top 10% of households owning 67% of that wealth in 1989 and increasing that percentage to 77% in 2016 …, a percentage that is even higher today. 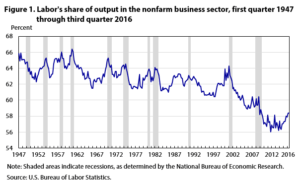 Moreover, as the table above shows, more than three-quarters of the decrease in labor’s share of output since 1947 has come since 2000.  That has been jarring, and is a trend that is continuing as businesses employ more-and-more capital – for robots, artificial intelligence, and computerization – to increase production at lower-and-lower cost … at the expense of labor.  The fact is that a majority of the skilled blue-collar jobs created over the last ~200 years have disappeared.  (TLR for example, has found it exceedingly difficult to hire qualified soda jerks, buggy drivers, clock winders, ice cutters, switchboard operators, milkmen, VCR repairmen, typesetters, elevator operators, and film projectionists.)  With factory-floor skills no longer in demand, there are fewer and fewer well-compensated, middle-class jobs.  America’s blue-collar labor growth instead has downshifted to unskilled service jobs largely in the low-paying leisure, sanitation, and food-service industries.  This 21st Century adjustment in labor needs has left skilled blue-collar workers behind.  It’s led to a disorienting erosion of workers’ living standards and fostered resentment and turmoil that, among other things, led to the 2016 election of populist political outsider Donald Trump … and to the election to Congress of radicals of the far right (e.g., Marjorie Taylor Greene, Matt Gaetz) and far left (e.g., Alexandria Ocasio-Cortex, Ilhan Omar).

More capital with less laborers results in a widening of income inequality as more profit flows to capital while labor experiences lower wages.  The Biden Administration has elected to address the consequences of this widening by redirecting to labor laborers a portion of the profits that have been flowing to capital capitalists.  (The Biden Administration, like the Trump Administration before it, has been lured by the siren song of Modern Monetary Theory to justify the continuation of enormous deficit spending (MMT was previously discussed in “Will Modern Monetary Theory Work?” here and “They’re All Keynesians Now” here, as well as in “America’s Perpetual Motion Machine” here.)  Labor accordingly will take more from the economy – through Federal entitlements – and capitalists will take less – via the Biden Administration’s proposed increases-in-taxes (which will barely dent America’s debt and deficits) and through policy-driven wage inflation.  Although the ARP will impact the wages of only perhaps 2% of the workforce and will sunset in September, the Biden Administration hopes that its ripple effects will be longer-term …, although it isn’t hanging its hat on that possibility.  In March, it placed before Congress a $2.3 trillion American Jobs Plan and this past week added a 10 year, $1.8 trillion American Families Plan.  The three Plans form a cohesively-progressive agenda that was initially outlined in the Democratic Party Platform that brought President Biden to the White House.  All three intentionally target an historic rebalancing of capital and labor.

I met a magical fairy recently while hiking in the woods.  She offered to grant me one wish.

“Sorry,” said the fairy.  “That is the only wish that I’m not allowed to grant.”

“Fine,” I said, “then I want to die the day after Congress is filled with honest, hard-working, bipartisan men and women who act only in the people’s best interests.”

“You crafty bastard,” replied the fairy.