Capitalism again in 2021 is under attack.  Any number of Covid-19 chroniclers are pointing to China’s 2020 economic outperformance as evidence of the superiority of authoritarianism centralized government planning, adding that China’s Made in China 2025 strategy is precisely the type of planning that will inexorably lead to its global economic dominance (see “The Hegemon’s Handbook”) … and contrasting China’s success with the poor performance of America’s economy in 2020, blaming that poor performance on the failure of American capitalism and, further, pointing to January 6, 2021 as evidence of the failure of America’s democracy.

Attacks on capitalism are not new.  They repeat periodically, in cycles … and 2020 marks yet another turn of the cycle, a nadir in the perception and, perhaps the popularity, of capitalism, the result of an unaddressed accumulation of capitalism’s imperfections.  Those cyclical capitalist bottoms, however, necessarily result in subsequent apexes …, and for good reason.

Well-practiced capitalism has been an American trademark.  It is a principal reason for America’s preeminence over the past 230 years, an essential ingredient in America’s achievements, and a cornerstone in realizing its greatness.  It necessarily will continue to be a vital component if America … and Americans … are to repeat their successes.  In combination with Constitutional democracy, it creates a powerful economic, social and political potion.  Interestingly, America’s brand of capitalism is the original brand, the very same capitalism described in 1776 (a propitious year) by Adam Smith in “The Wealth of Nations” as “the system of natural liberty.”  Capitalism epitomizes the economic, moral, and aspirational superiority of free markets, exalting the free enterprise system.  It expressly relies on the effectiveness of laissez-faire economic policy and the minimization (though not the elimination) of government intervention.  In his first book, “The Theory of Moral Sentiments,” Smith championed the concept of capitalism’s invisible hand whereby free markets self-regulate and self-correct through competition, the push-pull of supply and demand, and individuals’ enlightened self-interest in promoting capital formation … to the ultimate benefit of the greatest number of people.  Embedded in capitalist philosophy is the belief in inherent individual rights, private ownership of property and capital, and the freedoms promised by democratic government.  This is what has been labeled “The American Way,” the means by which the American Dream can be attained through hard work and adherence to the principles of life, liberty, and the pursuit of happiness.

Capitalism, however, is not a utopian system.  It’s far from perfect.  It promises nothing … other than potential.  It holds out the possibility – and the opportunity – for everything.  What distinguishes it from other systems is individualized free choice, the freedom of each person to choose how to live and what to prioritize – be it material or spiritual.  It provides the assurance that each individual has the opportunity to use his abilities, ambition, diligence, and aptitude as he wishes to achieve his individual goals and aspirations and, in doing so, to benefit society as a whole.  America’s version of capitalism promises that anyone can be President, a philosophical aspiration unimagined in nations lacking a capitalist structure and an associated history of democracy.

The most-well known critique of capitalism’s pitfalls is “The Communist Manifesto.”  Published in 1848, its author, Karl Marx, described capitalism as a class struggle between downtrodden laborers and their affluent, entitled capitalist masters – and framed the two as an oppressive bourgeoisie minority exploiting an oppressed proletarian majority.  The Manifesto urged workers to unite and throw off capitalism.  Where in prior centuries the oppressed majority had been feudal serfs working for those born into inherent, landed wealth, the industrial revolution created a diverse working class that in similar ways was subjugated to the owners of productive industry – the capitalists who possessed a disproportionate share of society’s wealth … income inequality by another name.  Throughout the 19th and 20th Centuries, those who controlled the means of production garnered the substantial majority of society’s economic rewards.  Because of the efficiencies achieved by the Industrial Revolution, however, the value of labor – and the proportion of wealth allocated to labor – steadily increased … as did the quality of life of those who labored.  The 20th Century therefore saw  improving living standards, a narrowing of inequality, and relative social moderation.  As a consequence, authoritarianism lost favor.  Communism, socialism, and centralized planning failed to deliver what had been promised.  Meanwhile, capitalism-in-practice flourished, in time being recognized as the most efficient means of defeating poverty and raising the standard of living for the greatest number of people.  As the Technology Revolution progressed in the latter decades of the 20th Century, however, those benefits began to ever-so-slowly erode.  The skilled blue-collar jobs that had been created during the Industrial Revolution began to evaporate with automation and computerization.  The need for blue-collar labor was replaced by an increasing need for lower-skilled workers in low-paying leisure, sanitation, transportation, and food-service jobs and higher-paid workers in skilled white-collar service jobs (including computer programming, healthcare, law, and finance).  That erosion accelerated after the Great Recession when those without 21st Century skills found fewer and fewer employment opportunities.  The technological and economic upheaval was disorienting, fostering resentment and creating new winners and a larger proportion of new losers.  The maturing Agricultural and Industrial Revolutions of the 21st Century have combined with incipient Technology and Biotechnology Revolutions to create incredible opportunities for those with access to capital (including Jack Dorsey, Mark Zuckerberg, Jeff Bezos, and Elon Musk) and, at the same time, devalued traditional labor, placing a premium on education and widening the gulf between highly-trained, highly-educated urban professionals, on the one hand, and rural and service laborers, on the other – a gulf further widened by Covid-19 (discussed in “This Time is Different”).

Income inequality underpins revolutions.  America currently is experiencing a revolution.  Disparate American factions are at odds with one another, each looking to bend government policies to fit its own partisan vision.  Each of those visions, however, challenges historical American capitalism.  Neither vision is advocating, yet alone adhering to, the capitalist model that made America great – free markets operating with capitalism’s invisible hand to exalt competition in reliance on the economic forces of supply and demand to allocate labor and capital and on individuals’ enlightened self-interest to promote capital formation.  Free market philosophy emphasizes minimizing the role of government intervention and the influence of taxation on markets.  The far right consequently should not be championing Statism – economic concentration under government auspices –, Christian sectarianism and nationalism, or global isolation through the building of physical and economic walls to restrict the movement of people, goods and services …, and the far left should not be advocating ever-higher taxes, the building of Statist government projects and safety nets, or its own brand of political and social correctness.  Neither is attempting to build a constituency based on America’s greatest natural capitalist resources, showcased by the quality of America’s educational system and the limitless opportunities for advancement through hard work by those with ambition, diligence, and aptitude.  Each instead is advocating a combination of measures inconsistent with how Americans, and American capitalism, has succeeded.  Each, in its own way, is prescribing a formula for capitalism’s decline and, ultimately, its failure.

Inequality – in wealth, mobility and status – historically has been the fuse lighting violent revolutions.  Examples range from the French and American Revolutions of the 18th Century, to the European Revolutions of 1848, and the Chinese and Russian Revolutions and Arab Spring uprisings in the 20th Century.  America’s 21st Century revolution has been mild, but only by comparison … thus far at least, marked primarily by vitriolic partisanship and diffuse violence.  Not surprisingly, however, the same concerns about capitalism voiced in “The Communist Manifesto” are being advocated by substantial American constituencies …, on both the right and the left.  The historical capitalist philosophy championed by both Republicans and Democrats is being challenged undercut by extremists.  Each partisan side shockingly accordingly has adopted a range of positions, many of which mirror those articulated in “The Communist Manifesto” … and that run counter to the basic American capitalist principles voiced in “The Wealth of Nations” – from wealth taxation … to restricted trade in goods and limits on the free movement of labor … to government support for private and religious education and state ownership/control of social media … to government debt markets squeezing out private markets … and to direct government funding of industries and individuals – Statism.

Free market philosophy emphasizes minimizing the role and influence of government in individual decision-making.  That is an integral part of the American definition of capitalism, an economic approach that in operation has proven itself to be the best, fairest, most efficient and humane method known to man … for getting the world’s work done, for mitigating poverty, and for advancing civilization.  In his 1919 poem “The Second Coming,” written in the aftermath of WWI during the Spanish Flu pandemic, William Butler Yeats wrote:  “Things fall apart, the center cannot hold; Mere anarchy is loosed upon the world; The blood-dimmed tide is loosed, and everywhere The ceremony of innocence is drowned; The best lack all conviction, while the worst Are full of passionate intensity.”  One can only hope that Yeats was right in speculating that “Surely some revelation is at hand.”

Teaching the children their letters? 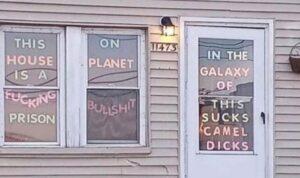