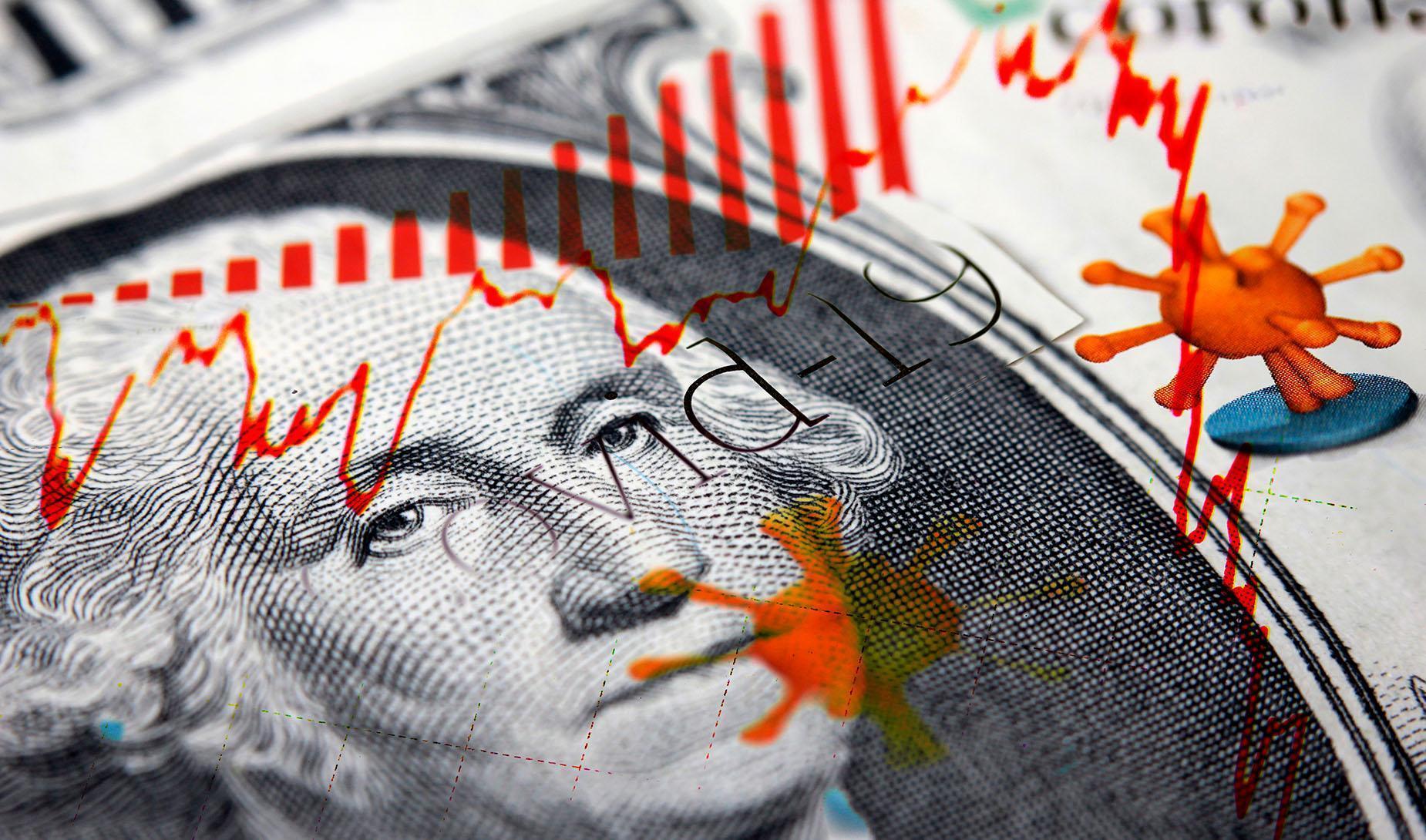 25 Sep Is America About to Break-up with TINA?

“With stocks priced to perfection, America’s love affair with equities may be waning. Are there attractive alternatives?” – The Lonely Realist

As TLR noted this past May, the Federal Reserve has the ability to deflate inflationary excess …, including priced-to-perfection equities. It merely has to “remove the punchbowl,” a metaphor coined by former Fed Chairman William McChesney Martin in warning that the Fed “is in the position of the chaperone who ordered the punch bowl removed just when the party was really warming up” because “[if the Fed] fails to apply the brakes sufficiently, and in time, we shall go over the cliff.” The Fed can apply the brakes by tapering – reducing the creation of new money – or by raising interest rates. The “cliff” to be avoided is too much inflation, which (per Milton Friedman) is “always and everywhere produced by a more rapid increase in the quantity of money than in output.” The increase in the quantity of money today is attributable to a furious pace of Dollar-printing by the Fed and the enactment of tax reductions and increasingly generous government subsidies by America’s government. This potent double-barreled fiscal expansionism without a concomitant increase in output has fueled asset inflation and America’s consequent love affair with TINA: There Is No Alternative to ownership of stocks. That love affair began in March 2009 after the Obama Administration injected $787 billion into the economy and the Fed began a seemingly endless series of monetary injections that have included Quantitative Easing, suppression of interest rates, bond-buying, and truly innovative economic tinkering. Like many other stock market booms that litter the history books, this one must end someday. With the Fed having announced a plan this past Wednesday to taper money-printing and with October fast approaching – a time of year that rattles market-watchers –, there is concern that we might be nearing the time when love wanes and America’s relationship with TINA crashes begins to tatter. Although TINA hasn’t lost her charms, the fact that risks are building is concerning. What might life be like after tapering?

When TLR first wrote in October 2020 that America’s Love Affair with TINA was likely to continue for some time, the QQQ index was at $290 (it had been $31 in 2009) and Tesla was at $440 (it had been $4 in 2009). At Friday’s close, the QQQ was at $373 and Tesla was at $774. That’s a lot of love! The fiscal love potion that made TINA so attractive was concocted by successive Republican and Democratic Administrations. In 2017 the Trump Administration enacted a $900 billion tax reduction and followed up in 2020 with COVID stimulus of $2.6 trillion, amassing an annual budget deficit of $3.1 trillion that complemented the Fed’s massive addition of >$3 trillion of COVID lending and bond-buying. That was followed in 2021 by Fed bond-buying of $120 billion/month and $1.9 trillion of Biden Administration stimulus that soon may be enhanced by a $1 trillion physical infrastructure bill and, possibly, by a further $3.5 trillion social infrastructure bill. The love shown by Congress and the Fed has propelled economic performance (despite this month’s short-lived? stock market correction that some assert was the result of concerns about the pending default of China’s Evergrande Group) because it’s been consistent – a trustworthy always-buy-the-dip love. Will the U.S. government and the Fed continue to do so by continuing to subsidize America’s economy, inflating asset values and stock market prices?

The answer, apparently, is “no.”

Fed Chairman Jay Powell said this past Wednesday that initial steps to reduce the Fed’s $120 billion/month bond-buying “could come as soon as” November and that the tapering process could be completed as soon as the middle of 2022. He was careful, however, to separate tapering from interest-rate increases – termed “liftoff” –, although minutes of Fed meetings indicate that half the voting members of the Federal Open Market Committee believe that liftoff might begin relatively soon, in the second half of 2022, a significant acceleration of prior Fed guidance. Powell nevertheless sweet-talked about a Fed process that would gently wean America’s economy off the sugar high of massive money-printing by normalizing rates and policies. However, the extraordinarily lofty level of Federal, State, corporate and private debt magnifies the impact of actual increases in U.S. interest rates, so that even small hikes would lead to significant disruption and volatility. There can be little doubt that, should cracks form in the stock or bond markets, in real estate or in the general economy, the Fed will back away even from tapering and, in fact, would be prepared to lower interest rates and/or adopt additional rounds of QE. Although the Fed will continue to talk-the-talk of tapering, it is highly-sensitive to the potential of tipping over the markets, businesses, and the U.S. economy.

Meanwhile, the economy can anticipate no further Federal subsidies/spending initiatives from the current Administration, especially with Congress dickering over the fate of the Senate-passed $1 trillion physical infrastructure bill – an up-or-down House vote is scheduled for Monday, September 27th – and with Democratic Party moderates continuing to battle with Democratic Party progressives over the Biden Administration’s proposed $3.5 trillion social infrastructure bill. Add to these the fact that a September 30th deadline is looming for funding government operations and raising the debt limit and there is no doubt that the Federal government will not be providing additional financial support to the economy for quite some time …, and most certainly at nothing near the level that stimulated economic growth over the last four years. The reality, therefore, is that unless Americans start spending their substantial savings, the U.S. economy will be slowing down.

The money that the two recent Administrations pumped into the economy was a necessary anti-COVID response that materially increased consumption and growth. At the lavish levels injected over the past 18 months, government spending managed to restore the American economy to its pre-COVID level. The result is that America’s GDP grew in the three most recent quarters by 4.5%, 6.3% and 6.6% and GDP is projected to grow by 3.7% in the current quarter. Unemployment now has declined to 5.2% (from a COVID high of 14.4%) and is steadily moving towards the Fed’s target of ~3.5% – increased employment is the Fed’s most important mandate. The inference to be drawn from this week’s acceleration of the Fed’s timetable for tapering and liftoff is that the Fed has determined that the combination of declining unemployment and increasing inflation requires action – current inflation exceeds 5%, which is not at all the “transitory” level that the Fed was expecting.

If Congress is unable to enact either of the infrastructure bills currently before it, Federal largesse will come to a jarring halt. That, coupled with the Fed’s tapering and liftoff, will do more than merely cut the legs out from under inflationary forces. In the view of a number of economists, it also is likely to mark the end of America’s love affair with TINA. Notable bear Nouriel Roubini has opined that even under current circumstances, the Fed will be unable to successfully taper, yet alone raise interest rates, without tanking the economy: “We are in a debt super cycle…, and central banks are in a trap. [Federal Reserve spokesmen have] said they are going to normalize policy rates, but with these levels of private and public debt, if they were trying to do that, there will be a market crash, an economic crash, and therefore, I think the path of least resistance is going to be to wipe out the real value of nominal debt at fixed-interest rates with higher inflation.”

That, however, appears a less-likely outcome today given the Fed’s apparent conviction(?) that America in on the road to a normalizing economic and inflationary environment. If that outlook is correct, the outcome would not be bullish for either indexed stock market investments or their more apparent alternatives. Interest rate liftoff, for example, would mean increased borrowing and debt-service costs, resulting in a generalized reduction in corporate profits and declining bond prices that would return equity and fixed income investments to their historical valuation norms based on fundamentals instead of the communal “everything goes up” investment success enjoyed over the past 12 years. With a Fed policy focused on stability and inflation-control, real estate, precious metals, meme and other bubble prices would find relatively sparse bullish moments. Nevertheless, based on the St. Louis Fed’s projection of a 2.1% long-term inflation rate (which many economists find conservative), inflation would compound prices to a 23% increase over 10 years. Such a level of so-called “modest inflation” would significantly inflate any number of asset values, further increasing wealth disparities as well as reducing purchasing power for those on fixed incomes.

As TLR has noted, value investing is good for American competitiveness because it means that capital will be allocated to those businesses that are able to use it most effectively. The games people are playing with bubbling investment bets on meme stocks, cryptos, NFTs, etc., are a form of gambling that does not fuel jobs or America’s economic growth. America’s love affair with TINA therefore is not likely to flare out. It will continue, though most likely on a selective, value-oriented basis. 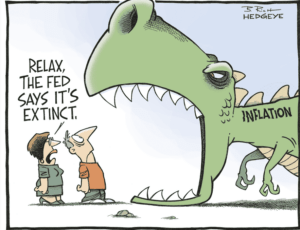