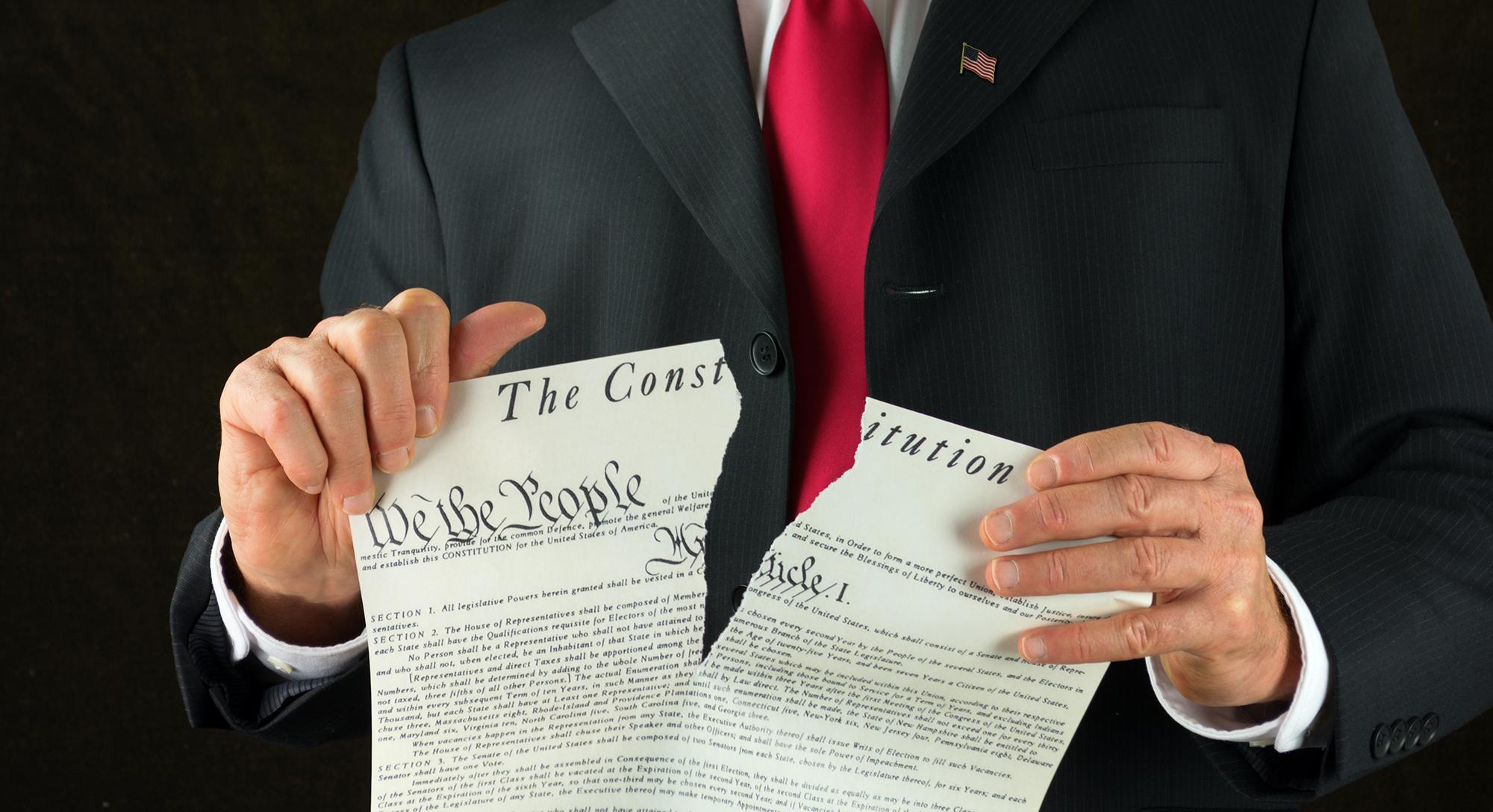 Posted at 14:27h in General by William Natbony 0 Comments

“America’s most recent Presidents have stretched their Constitutionally-granted powers to an extreme. Unless Congress acts to end the power-grab, America may be breeding a monarchy.” –The Lonely Realist

Arthur Schlesinger’s 1973 book, The Imperial Presidency, reached the conclusion that the Constitution provides no real limits on Presidential power. Recent Presidents have decided to turn that analysis into a reality. Each in turn has arrogated more and more power to himself … and to the office of the President. The gradual – and consistent – increase in executive influence and control over America’s laws, law enforcement, war powers, composition of the judiciary and public and private institutions has led to a retreat from legislative responsibility and an erosion of Congressional prerogatives. It is leading America towards an Imperial Presidency. It already has spawned a judicial system characterized by partisan Presidential-alignments – judges are not selected on merit but on political conformity and single-issue commitment. This did not begin with Bush2 or Obama or Trump or Biden …, but it has gathered momentum with each. The result is that Congress today is allowing President Biden, with the barest of Congressional majorities, to continue that erosion process, moving America ever closer to an Imperial Presidency … as it did with former President Trump. This is not a Republican or Democratic Party issue. It is a Constitutional one. Although it may appear that partisanship would counterbalance Presidential Power, the opposite is true. Congressional gridlock inspires Presidents to spread their wings as wide as possible, taking action unilaterally …, which is precisely what recent Presidents have been doing.

The Constitution provides for a balancing-of-power among America’s three branches of government: the executive (the President); the legislative (Congress); and the judiciary (ultimately, the Supreme Court). Each branch has primary responsibility for a different set of specified tasks. Each is intended to oversee the others to ensure that actions taken by one do not overstep democratic boundaries. There is nothing in the Constitution, however, that prevents a branch from failing to fulfill its responsibilities or from becoming minimally-functional. There also is nothing that prevents one or two … or all three branches … from being “captured” by a politically-adept politician or movement. Whether a democracy succumbs to “capture” ought to be determined at the voting booth by an electoral majority. However, with gerrymandered voting districts, bottomless spending on electioneering, partisan voter qualification laws, and tribally-driven social media campaigns, American elections no longer are determined by such a majority. The electoral process and government operations now most-often are driven by partisan loyalty and tribal connections.

Article 1 of the Constitution enumerates the powers delegated exclusively to Congress. Although these include the powers to tax, spend and borrow, Congress over the past 20 years has refrained from increasing taxes to pay for government operations and entitlements (tax-and-spend) and, instead, has done the opposite, lowering taxes and increasing expenditures. It has made up the growing shortfall by borrowing (a p0licy of borrow-and-spend) – issuing enormous amounts of U.S. Treasury bills, notes and bonds – creating ever-increasing budget deficits that have grown from $150 billion in 2002, 1.4% of GDP, to over $3 trillion in 2020, 15.6% of GDP. The reason is simple: members of Congress prioritize their re-election, ignoring their responsibility to constituents and democracy (creating cogent reasons to enact term limits). Congress has ceased to show even passing interest in balancing America’s budget or in raising taxes or reducing spending/earmarks/entitlements. America’s debt today accordingly exceeds $28 trillion, with Congress satisfied to run a 2021 budget deficit of >$3 trillion, having run a $3.1 trillion deficit in the 2020 fiscal year and a $1 trillion deficit in the 2019 fiscal year, with fault being shared equally by Republicans and Democrats (both of which have latched onto Modern Monetary Theory as a cure-all). It therefore should come as no surprise that America’s debt has become unrepayable (with some hoping that it can be inflated away by Federal Reserve money-printing). In lieu of making the difficult budgetary decisions voters entrust to elected officials, Congress for the past month has been embroiled in deciding whether to raise America’s debt limit or allow America to suffer a catastrophic default. That would seem an easy decision for an elected official …, but not for 21st Century Republicans and Democrats. Congress accordingly has chosen to defer this decision until early December (with no one questioning the fact that the debt limit must be raised), which will exacerbate year-end clashes over trillions in government spending. This example of an irresponsible legislative process would lead any President to seek ways to exercise executive power in order to avoid unnecessary and disruptive Congressional crises.

The power of a President to wage war is an example of the ability of a President to usurp Congress’s Article 1 powers. Notable examples include the Korean “police action” War undertaken by President Truman and the Vietnam “police action” War authorized by President Johnson, both without required Congressional authorization. More recently, Congress in September 2001 passed the Authorization for Use of Military Force against those responsible for the 9/11 attacks which successive Presidents have treated as providing carte blanche authorization for the use of military force against all militant organizations – not solely Al Qaeda –, including in Afghanistan, Iraq, the Philippines, Georgia, Yemen, Djibouti, Kenya, Ethiopia, Eritrea and Somalia. Presidents have learned that members of Congress may complain, but that Congress will not take bipartisan action to restrict a President’s exercise of Imperial Power. Future Presidents therefore are likely to take usurpation to greater and greater extremes (with those assisting in such unconstitutional efforts having assurance that a Presidential pardon will cure conspiratorial excesses).

President Biden is continuing the tradition of stretching Presidential Power to its limits. Efforts in his first 8 months in office have led to 64 executive orders, 37 Presidential memoranda, 138 proclamations, and 23 notices – that’s a lot! They include a vaccine “mandate” which, at best, stretches the law (and, at worst, exceeds it) as well as government’s ability to enforce it. This follows President Trump’s average of 55 expansive executive orders/year and President Obama’s average of 35. Yet it was candidate Donald Trump who derided executive orders as “power grabs” and “a basic disaster,” which they are – that is, before he became President and began using them to engage in a broad range of unilateral actions to establish a stronger, closer-to-Imperial Presidency. What is noteworthy is not the number of executive actions that recent Presidents have taken. It’s that those actions have usurped legislative and judicial authority without Constitutional consequence. They also have frequently reversed the executive actions of prior Presidents that themselves usurped legislative and judicial authority, sowing confusion, creating economic damage, and eroding relationships. These practices are accelerating … and to dizzying effect. Congress of course can pass laws that override executive actions …, but it hasn’t done so. At the same time, Presidents have been arrogating increasing powers away from State governments. Increasing Federal control has become a goal of both Republican and Democratic Presidents, with both Parties diverging from their slightly right-of-center and slightly left-of-center roots towards the extremes of autocracy and Sanders’-socialism, respectively, prioritizing the centralization of authority in the Federal government – what TLR refers to as Statism. Each has become a supporter of tariffs and of restrictions on free trade and the free movement of labor. Each has become a supporter of private and religious education, of state ownership or control of social media. Each has facilitated the issuance of government debt that has prioritized government debt markets. And each has supported direct government funding of industries and individuals.

Under the Constitution, in order to exercise executive authority a President must rely on laws enacted by Congress. The Constitution does not grant a President the power to enact laws or to take actions that are inconsistent with or in defiance of laws enacted by Congress. Prior TLRs have addressed the authority of a President, any President, to issue executive orders that defy a Congressional or Constitutional mandate, including several of President Obama’s executive orders and several of President Trump’s. Republicans in Congress were correct in challenging President Obama’s abuse of executive orders in his various attempts to stifle Congressional authority and correct in criticizing the Obama Administration’s selective enforcement of laws. And Democrats were correct in challenging President Trump’s broader attempts to do the same. Both efforts were ineffective because of their exclusively partisan backing. They divided along Party lines and therefore weakened, rather than strengthened, American Constitutional democracy. They instead empowered an Imperial Presidency. In 1788 in Federalist No. 47, James Madison warned: “The accumulation of all powers, legislative, executive, and judiciary, in the same hands, whether of one, a few, or many, and whether hereditary, self-appointed, or elective, may justly be pronounced the very definition of tyranny.” It will take bipartisan effort to maintain American democracy. America is running out of time to do so.