“America is facing a disproportionate number of existential threats. They can’t be successfully navigated without common agreement that they exist… and that they must be confronted.”
– The Lonely Realist

“I wish it need not have happened in my time,” said Frodo.
“So do I,” said Gandalf, “and so do all who live to see such times. But that is not for them to decide. All we have to decide is what to do with the time that is given us.”

For Frodo and Gandalf, the threat of Sauron was the crisis of their era, the one iceberg upon which Middle Earth could founder. It may seem that the crisis for America today is the threat of continuing pandemics, but that would oversimplify. It would be a blessing if pandemics were the only icebergs in America’s path. Icebergs abound.

The iceberg metaphor conceptualizes the American Ship-Of-State gliding through an ocean of existential threats. The American Ship may be thought unsinkable, and the icebergs may appear small– and perhaps even inconsequential from a distance– but it’s not, and they’re not. National Ships are historically prone to encounter icebergs, and icebergs stretch to the horizon, some constituting obvious hazards and others being submerged obstacles to be sidestepped, but all constituting mortal threats to America’s well-being, to American stability, American security, and American prosperity. Navigating a course through hazardous waters requires consistent and united political, military, economic, and diplomatic executive and legislative leadership- which America notably has lacked for the last two decades. Being graced with competent executive and legislative leadership requires that a nation have a focused will– a consensus that the waters surrounding it indeed are dangerous, that successful navigation requires farsightedness, a common agreement on national direction, and a level of nationalism that necessarily surpasses factionalism. That consensus has been lacking in America. In the Tolkien Trilogy, Gandalf engineered an alliance of Wizards, Hobbits, Elves, Dwarves, Men… and the Dead… to save Middle Earth. Saving America requires a great deal less– merely an end to bitter American divisiveness through a meeting of the minds, a straightforward compromise between Democrats and Republicans. That too has been lacking.

Will the consequence be an American Titanic, an epic tale about a once-mighty Ship-Of-State that came to an icy end, or a “Spaceship America” that rose above adversity to launch humanity to the stars in a Blue Origin New Shepard or a SpaceX Mars-ship (both potent symbols of the success of America’s free enterprise system and of its future potential)?

The world would prefer the latter (with the noteworthy exceptions of Chairman Xi, President Putin, Supreme Leader Un, and several other autocrats).

America’s economy is overloaded with debt, at all levels, which has incentivized the Federal Reserve to run the government printing press in overdrive, engage in Quantitative Easing, and “do whatever it takes” in an effort to ignite inflation and the Biden Administration to enact legislation that spurs wage inflation, each of which is destined to debase the Dollar as the world’s reserve currency in the hope that doing so will inflate away America’s and Americans’ unrepayable debt. Meanwhile, COVID-19– and its developing mutations– create a risk that serial pandemics might strangle America’s economy amid partisan divisiveness over vaccinations, mask-wearing, and social distancing. These are icebergs with significant breadth and depth. Avoiding their catastrophic consequences will require adroit executive and legislative navigational skills.

America’s diverse races, religions, and cultures, and America’s historic focus on immigration no longer are seen by many Americans as the components of a superior society– necessary to generate a melting pot of creativity that inspires American Exceptionalism and generates success stories that have been experienced by no other nation in history. Race has become a dividing line while religion no longer binds Americans as it once did. The American culture has become increasingly and competitively tribalist. These domestic struggles– the navigational limitations of the 21st Century American Ship– limit the ability of America’s leaders to steer a steady course.

In the 20th Century, American Exceptionalism was prominently represented by America’s world-beating education system. Another iceberg facing America in the aftermath of decades of educational sclerosis– followed by COVID-19 school lockdowns– is the unhappy reality that America’s educational superiority has meaningfully eroded. Its education system today is far from being exceptional. America’s future success depends on reversing this decline and ensuring that the effective education of its future generations is a priority instead of an afterthought.  It must find ways to navigate around this imposingly-proximate iceberg.

Unfortunately, America’s Political Parties are continuing their hostile engagement in what has been accurately termed Civil War II, consuming energy, resources, and America’s will, as well as undercutting American democracy. Their ongoing battles foreshadow the two dauntingly divisive icebergs on the horizon: 2022’s midterm elections; and 2024’s Presidential Election. Continued internal strife– especially at today’s heightened levels– will present golden opportunities for America’s foes, which they most certainly will use. It also will further alienate America’s remaining friends. America today retains superior cyber-warfare capabilities, the world’s most powerful military, the world’s reserve currency, and the resources to sustain its role as global hegemon, but only if it can navigate these icebergs.

How can America do so? How can it avoid being Destined for War– and losing that war– as warned by Graham Allison?

Answers can be found in an examination of historical cycles. Although history doesn’t exactly repeat, it most certainly does rhyme. A compelling precedent can be found in the message delivered by President Eisenhower in his 1953 State of the Union address in which he pledged that his Administration would pursue “a middle way between untrammeled freedom of the individual [ED. NOTE: today’s Republicanism] and the demands for the welfare of the whole Nation [ED. NOTE: today’s Democratic Partyism]. This way must avoid government by bureaucracy [ED. NOTE: an overabundance of regulatory red tape] as carefully as it avoids neglect of the helpless.” President Eisenhower further pledged “to inspire creative initiative in our economy so that its productivity may fortify freedom everywhere and dedication to the well-being of all our citizens and to the attainment of equality of opportunity for all so that our Nation will act with the strength of unity in every task to which it is called,” precisely the appropriate policy mix for today’s America. Eisenhower’s moderation in domestic politics was equaled by his call for a “positive foreign policy that is clear, consistent, and confident, and the product of genuine, continuous cooperation between the executive and the legislative branches of this Government. It must be developed and directed in the spirit of true bipartisanship.” Those words should ring bells on Capitol Hill.

Eisenhower’s accomplishments as President have led historians to number him among America’s greatest Presidents. He kept America out of conflict with the USSR during the most fraught eight years of Cold War I; he ended the Korean War without allowing a war with China to flame out of control; he balanced the budget, something that no 21st Century President has accomplished; he was the moving force in building America’s 20th Century infrastructure, including America’s interstate highway system; and he sponsored and signed the Civil Rights Bill of 1957, the first piece of civil rights legislation since 1875.

It is no surprise that Eisenhower’s “middle way” and “bipartisanship” can achieve greatness. Partisan divisions weaken and destabilize, which is what has happened and is happening, to America today. The way forward truly is that simple. 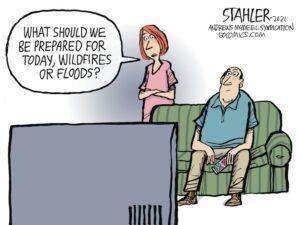