Posted at 14:09h in General by William Natbony 1 Comment

“2021 became a temporary resting place for debris accumulated as a result of more than a decade of American economic, political and foreign policy errors. Wading through the debris provides insights into 2022.” –The Lonely Realist

2021 was supposed to be the year when the world shrugged off COVID-19 and returned to a semblance of normalcy, when the antics of Donald Trump were replaced by the somber thoughtfulness of Joe Biden, when Vladimir Putin, Xi Jinping, Ayatollah Khamenei and Kim Jung Un relented in their anti-Americanism and began to reap benefits from greater global cooperation, and when the Federal Reserve began the process of normalizing economic policy and the stock and bond markets returned to a balanced relationship …, but that’s not what happened. No cycles turned. Trends instead accelerated and mutated. History didn’t repeat …, although it most certainly rhymed. COVID-19 continues echoing the Spanish Flu pandemic of 1918-1921, politics eerily resembles the 1930s and America’s pre-Civil War period, and America’s economy is still experiencing unprecedented growth coupled with ever-widening inequality. As a result, the world on December 31, 2021 was a more dangerous place, a more divisive place, and a more volatile place than it was on December 31, 2020. What it will look like on December 31, 2022 is anyone’s guess …, with TLR’s two resident Oracles conflicted in their guesswork.

Looking back, economic news in 2021 focused on COVID, cryptos, currencies, inflation, infrastructure, wages, TINA, the Federal Reserve and meme stocks. Political issues included America’s Constitution, partisanship, abortion, immigration, mask mandates, and democracy, and key societal issues included social media, insider trading, America’s eroding educational system, taxes, American capitalism, Silicon Valley ethics, and the “new normal” arising from the COVID-19 pandemic. From an international perspective, America continued to stumble. It was challenged on a broad range of foreign policy issues, especially with Russia, China and Iran. It admitted defeat in Afghanistan and found itself unable to effectively respond to China’s takeover of Hong Kong or its threats to invade Taiwan. Although the global economy strongly rebounded in 2021 and is likely to continue bouncing, democracy is experiencing a serious recession. TLR has been voicing both alarm and warning, echoing concerns raised by Ray Dalio. There has been no resolution of any of these problems. All are likely to escalate in 2022.

TLR during 2021 continued its focus on America, concluding that America’s 1788 Constitution has ceased to function effectively. What was best for 13 colonies in the 18th Century is out-of-date in the 21st, which should come as no surprise – 230 years is a long time, especially during an era of unprecedented agricultural, industrial, technological and biotechnological revolution. Although TLR in 2021 suggested a potential starting point to address America’s Constitutional quagmire, there are no simple fixes. Roe v. Wade, for example, remains an intractable problem. It and other Constitutional issues will continue to confound and divide America.

What will happen to America’s economy in 2022?

Media talking heads continue to buzz about inflation, but don’t let them fool you. The 2020s are not the 1970s. 2021’s inflation figures have been distorted by comparing them to the depressed COVID performance statistics of 2020. Add in COVID-created supply chain snafus and what America is experiencing indeed is the “transitory” inflation previously touted by the Fed. Inflationary pressures will ease in 2022 – there may even be deflation – and the threat of significantly higher interest rates will evaporate. They must. Otherwise, there will be recession and an unprecedented Republican sweep in the Midterm elections, something the Biden Administration will do its utmost to avoid. In addition, neither America nor Americans can afford higher interest rates given their enormous debts. The American economy therefore will cool in 2022, as will the stock market’s exuberance. Although TINA will remain attractive as an alternative to many other asset classes, her appeal will fade, perhaps significantly, to more accurately reflect her age and health.

American politics nevertheless will take a decided turn in the 2022 Congressional elections with Trump Republicans sweeping into office … UNLESS, that is, Joe Manchin assumes the mantle of Democratic Party leadership, working with the Biden Administration to change the Party’s direction and adopt a moderate Democratic legislative agenda that co-opts the Progressive Wing’s most popular proposals. In doing so, Manchin would become the front-runner for the 2024 Democratic Party Presidential nomination. Such steps would radically change the chemistry of American politics.

Whether or not Senator Manchin assumes a national leadership role, Democrats during 2022 will have the ability to enact whatever agenda they can agree on. They will reach a consensus, choosing an aggressive, partisan path. Failure in 2022 would result in the Democratic Party losing control of government for what could be a very long time. With that as the default outcome, Democrats will act.

Which brings us to global affairs. While the developed world has become wealthier during the pandemic, poorer countries are suffering. The result is that global, regional and local tensions are rising. Struggles between America and its avowed enemies also are increasing, a group TLR has labeled The Axis of the Sanctioned. The appearance today of global stability therefore is belied by intensifying national competition, religious warfare, factionalism, environmental degradation (water shortages being a rapidly expanding pressure point) and economic need. Among the world’s many flashpoints, America and its Israeli ally are entwined in a Middle East of endemic military conflict and terrorism, a breeding-ground that today is experiencing armed conflict in Syria, Turkey, Yemen, Gaza and Lebanon and is further threatened by a heavily-armed, sanctions-starved and soon-to-be-nuclear Iran. In Asia, China’s increasingly militant nationalism and oft-stated ambitions to absorb Taiwan and attain global supremacy create more far-reaching threats. Frighteningly, China is facing the need to distract 1.4 billion Chinese from looming economic, environmental and aspirational challenges, with China’s draft-age male population now exceeding its female population by ~20 million. That gender gap represents an unprecedented army of potential “wolf warriors.” And, of course, there is Russia’s pending assault on Ukraine … and its designs on Europe itself, nuclear North Korea’s unsated need for economic relief, Turkey’s empire ambitions, the growing presence of terrorist organizations in Africa, Asia (the Taliban once again rule Afghanistan, once the refuge of Osama bin Laden), and the Middle East, and the retreat, and in some countries the defeat, of democracy in Asia, Africa and Central and South America. The potential for unpleasant global surprises in 2022 is high and rising. Will America be up to the challenges?

And then, of course, there is COVID-19. The hope is that it will mutate into a cousin of influenza or, better yet, into the common cold. The reality, unfortunately, is that no one can know … and that the threat of future pandemics remains very real. 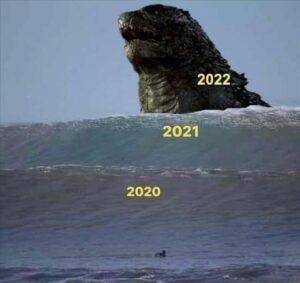